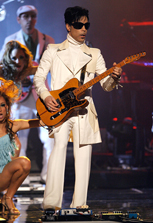 Having worked his purple magic on YouTube and asked for over 2,000 unauthorised videos to be removed, Prince is now working down his hit list, by targeting The Pirate Bay next.

We heard a few months ago the short purple-clad one had a bee in his Raspberry Beret bonnet about all his music videos being illegally shared on sites such as these, and even Prince-themed products on eBay. Needless to say, he doesn’t just dish out idle threats, that Prince character.

Prince is showing he can walk the walk as well as talk the talk, and has prepared a lawsuit against The Pirate Bay, the renowned Swedish BitTorrent indexing site, in three different countries. Whilst it doesn’t actually host any of the illegal content, it does promote file-sharing, and is highly-regarded as giving a constant ‘two fingers up’ towards Hollywood and the music industry. The US, French and Swedish governments are all being pestered by the singer, to make his attack against the site all the more fierce.

Not only is his wrath being wrought on TPB, but also the many companies which advertise on the site. An inquest into the earnings made by the founders of the site has also been launched, according to Web Sheriff, a service which protects copyrighted content from being used by internet pirates, the three founders earn US$70,000 a month in advertising revenue.

Obviously the thing to do is quickly hit The Pirate Bay and start downloading his entire back catalogue and then share the seeds on BitTorrent. He may be able to paint the town purple wherever he tours, but surely he can’t sue the whole world – can he?!

(via Crave at CNet)

Related posts
Raging Prince out to get YouTube, eBay and The Pirate Bay!
Don’t expect to make a fortune from selling your Prince Mail on Sunday album on eBay
Shops get angry over paper’s Prince album giveaway