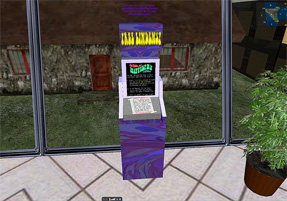 Virtual worlds thrive on money, after all, it’s what keeps the servers running, and the gamers happy. But how does a company create revenue, through sales of virtual goods? How can this sector continue to grow, when sites like Facebook have seen free gifts application hacks made available, so paid-for gifts are no longer necessary?

These questions, and more, are due to be asked in the upcoming panel, where the Senior Editor at Harvard Business Review, Paul Hemp, Professor Michael Hulme from the Centre for Study of Media, Technology & Culture, David Orban CEO of Questar, Mat Small, CEO and Founder of Millions of Us, and Peter Edward, Director at Home Platform Group for Sony Computer Entertainment will attempt to answer this questions.

Adam Pasick is once again moderating this panel, and asks Peter from SCEE about their virtual goods use within the Home Platform. He explains that virtual goods allow you to decorate your avatar, show your personality, and explain to users in a different character just what sort of person you are, what your interests are, and your status within the game, whether you can afford to drape yourself in designer goods within the game.

David Orban, from Questar, loads up his Powerpoint presentation (well, the Mac version…he’s been sitting next to me the whole day typing away on his Mac). He talks a lot about 3D printers, and the possibility of owning a good in a virtual world, and being able to print it out and own it in real life, too. Somehow I think this is several years off still!

Goods we need in real life will be slowly needed in the virtual world too, such as washing machines, which would allow companies to gain a better opportunity at advertising within the game, more subliminally perhaps.

Facebook gifts are raised, as I mentioned before, where someone says they’re useless, as you can’t do anything with them, they’re just pixels. At least virtual gifts in online games can actually be used, and aren’t a waste of money. Try telling that to the amount of parents faced with their teens’ credit card bills.

Limiting supply of virtual goods works well, creating a sense of urgency and uniqueness. If there are masses of one product, and readily available, then the temptation to fork money over for it goes down. Playing online games, you want to be different, you want to stand out from the other avatars, so that’s why having virtual goods to decorate yourself with, differentiate yourself with, helps a lot, especially when they’re available only in small amounts, otherwise everyone would look the same.