This is a very odd thing. But the press release appears to be genuine, so we’ll do something on it.

Upcoming PlayStation3 racer Gran Turismo 5 will let gamers download episodes of the BBC’s boy racer show Top Gear, thanks to a deal between Sony and the Beeb. The game will have a little section called “GT TV” inside it, where web-connected PS3s will be able to download 40 episodes of the show through the PlayStation Network, along with other content (presumably “user generated”) based around the racer.

Here’s what it looks like on PS3, so you can imagine it better: 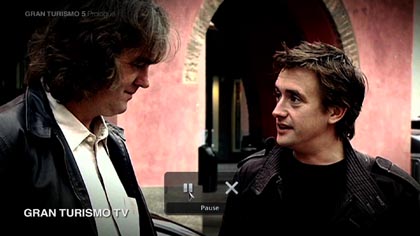 Better still, the Top Gear Test Track will feature in GT5, so you’ll be able to smash round the course in a Reasonably Priced Car of your own. The service launches alongside the game… which is sometime during 2008.