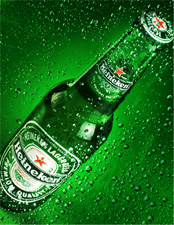 Marco van Veen takes the stage first, and begins by admitting they don’t have a virtual world, however they are looking at featuring in virtual worlds, through advertising. Obviously being a beer manufacturer, he says they still have a responsibility to ensure minors aren’t targeted by their advertising, with advertising only being featured in online worlds where at least 70% of the users are over 21.

Second Life was an obvious answer. They looked at whether users would like to ‘drink’ the beer in Second Life, but with most users not that enthralled with drinking soft drinks, or eating food within the game, they decided not to go down that route.

They also looked at whether Heineken was expected to feature in online worlds, and whether it would actually improve their brand, whether Second Life was just a temporary fad or here to stay, and so on. Out of all the surveys they conducted, they determined that user statistics weren’t conclusive (!). SECOND LIFE STATS LIE! (Obviously).

He finished on a high note, saying that Heineken believe virtual worlds are definitely here to stay, and they will continue to look into it in more detail.

Adam Pasick begins to ask Daan Josephus Jitta, about his involvement with virtual worlds. His company hasn’t entered the virtual world either, however are definitely going ahead with involvement. The risk of simply ‘doing nothing’ is asked, whether their company will be overlooked if they don’t stick a finger in the virtual world pie. Jitta responds by saying they already have a website, and hope that that’s enough for now, however they do believe that if they choose not to go ahead with joining a virtual world, that won’t spell the end of their company.