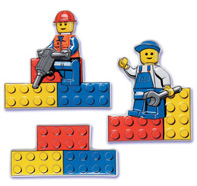 Ooh! Ooh! The good one we’ve all been looking forward to today. Alice Taylor, Commissioning Editor at Education at Channel 4, plus woman behind the brilliant Wonderland gamer blog, is on this panel, as is Michael Smith, the CEO and Founder of MindCandy, who are here today promoting Moshi Monsters.

Timo Soininen, CEO at Sulake and Habbo, Mark William Hansen from the Lego Universe, Mattias Mikshe, CEO of Stardoll and Marc Goodchild, Head of Interactive and On-Demand at BBC Children’s make up the rest of the panel, which is moderated by Adam Pasick, the Reuters Bureau Chief at Second Life.

Money made within games created for children is mentioned, and whether it’s worth adding a fiscal element to games. Someone on the panel argues that this is the first generation being hit with the wave of virtual games, and they’ll grow up accustomed to it. To them, this virtual world they inhabit is as real a world as the one they live in, so why shouldn’t they be able to buy and sell items within games, he argues.

Everyone within this space is allowing children to do so, and it’s important obviously for parents to be mindful of what their children are doing.

The debate over subscriptions vs free game-playing is raised, with the act of paying for a subscription being a huge hurdle for some young gamers.

Timo from Habbo begins to describe their business model, with Habbo coins being one of the sources of revenue for the company. In the US, in-game advertising is massive, and they hope to see some of that happen for they game.

The moderator, Adam, asks whether it’s possible kids might grow out of one specific virtual world, and move on to another one, as their tastes develop? Alice Taylor points out that kids have constantly been fickle, and someone else says that most young users have more than one active account with other worlds.

Obviously companies are wanting to keep their users loyal to them, however Timo from Habbo said they’ve seen many years since their first generation of users started playing, and unfortunately most of them have moved on, as they’ve grown out of the game. The average life-span of a Habbo gamer is about three months, he tells everyone.

“Role-playing is a part of growing up, a part of adolescence”, says Mikshe from Stardolls. They are all playing several games at once, as are they following several different TV shows at once and interested in other things.

Goodchild claims hopefully in the future, users won’t have to abandon one avatar in a game and start up another, hopefully they can use the same data to create the same avatar, only in a different game.

Security when kids are playing games online is increasingly important, with the onus being on the parents to monitor their kids’ usage. It’s also up to the individual company, says Mark William Hansen, from Lego, to provide for the children and ensure they can be adequately protected.

The gate is thrown open to the audience, with one man asking whether the first virtual world children play will ‘taint’ them for life, so they think that’s what virtual worlds are, without knowing WoW and other adult games. One member on the panel answers by saying it’s much the same as children playing Legend of Zelda, won’t they realise Halo 3 etc exist? Of course they will – and online gaming is much the same, especially with most gamers having more than one account with different worlds.

Our very own Editor, Stuart, asks about virtual worlds being constructed by toy manufacturers, whether kids of parents would wisen up to that? Someone on the panel claims that kids are more intelligent than their parents in this instance, and will be able to see straight through marketing spin, especially when other, more unbias games are on offer.

Every year, parents are getting more and more strict with their children, not allowing them outside their front door for fear of all the dangers lurking outside. Alice Taylor argues that allowing children to socialise online still gives them the playground playing, but in a safer environment. And when the only other option is watching TV in lax-parenting households, it’s a fair deal.

One question raised by an audience member is whether kids are playing adult virtual worlds, and whether they’re a form of competition to children-orientated games. Moshi Monsters chap, Michael Smith, says it’s more likely social networking sites, such as Bebo, are the true competitors to their users’ time.