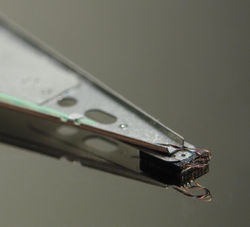 Let’s be honest, hard drives aren’t exactly the sexiest bits of computer gear, but they’re increasingly important as we download yet more data from the Net and have to store it.

A new report from GfK shows that the price per gigabyte of external hard drives has fallen by around one-third in just one year.

This trend is attributable in part to the growth in popularity of notebook computers, many of which have fairly low-capacity internal hard drives.

GfK predict that over two million drives will be sold this year.