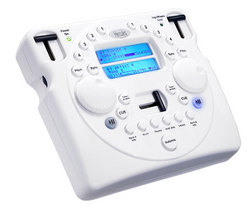 The wheels of steel aren’t dead; they’re just evolving. While there are still plenty of DJs out there playing vinyl records to adoring crowds of blootered enthusiastic clubbers, new technology is having a big effect on dancefloors around the world.

Think USB mixers, allowing people to DJ from their laptop. Or even standalone decks that you can plug your iPod into. Meanwhile, where traffic lights were once the most high-tech any wedding DJ got, nowadays it’s all lasers and scrolling LED messages. With that in mind, here’s Tech Digest’s pick of ten superstar gadgets for the modern DJ.

1. Hercules Mobile DJ wireless MP3 mixer
This battery-powered two-deck controller lets you mix up a storm with CDs, MP3 tracks and even WAV files (for those essential comedy farmyard noises to play over the sweary bits in some songs). You get two screens built in, and it’s wireless, so doesn’t need to be tethered to your laptop to control tracks. Read more

2. Groove Glove
Billed as ‘a DJ deck for your hand’, this futuristic-looking glove is attached to a speaker and DJ-console, letting you pump out tunes while triggering four sound effects at will. If Tron were to play the main room at Fabric, he’d wear this. Probably. Read more

3. Numark iDJ2 iPod DJ console
Professional iPod mixing console that you plug your iPod into, and can then play two tunes at once for mixing purposes, along with all the scratching, pitch control, looping and cueing you’d expect from a mixing deck. Even better, you can record your stellar set onto the iPod for later listening. Read more 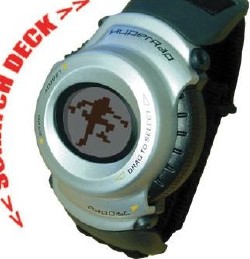 4. HyperRap DJ Scratch Watch
The world’s first disc-scratching turntable watch, apparently. Swatch must be kicking themselves. It comes with a built-in turntable gizmo, and two preloaded games that involve scratching beats, and watching dot-matrix dancers strut their stuff. For less than a fiver, you can’t argue. Read more

5. Ministry Of Sound DJ CD player/scratcher
This gadget doesn’t ride the MP3 dancefloor zeitgeist (is that right?), but instead it provides an easy way to DJ using your CDs. There’s a turntable and all manner of buttons for pitch control, looping and cueing up tunes, plus a handy BPM counter. Real DJs might not fancy it, but bedroom jocks will love it. Read more

6. Moving Message Sign
You know, one of those scrolling LED displays that let you communicate with your adoring crowd (i.e. write ‘HAPPY BIRTHDAY LOUISE’ or ‘PLEASE DON’T REQUEST ANY MORE SNOW PATROL’). This £49 model allows messages with up to 60 letters, comes with 26 pre-programmed messages, and has a built-in keyboard to make tapping them out that much easier. Read more 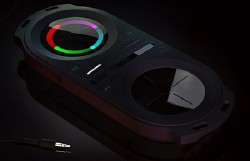 7. Pacemaker Pocket DJ MP3 player
iPod isn’t the only MP3 player to get its DJ thang on. The Pacemaker is a 120GB-capacity player with a battery life of 18 hours, which has DJ features including crossfader, bend, pitch, loop and sound effects. Out this Autumn, it’ll also allow you to save your mixes on the device for later listening. Read more

8. Mini DMX laser display
As I said, traffic lights simply won’t cut it on the modern dancefloor (unless teamed with temporary roadworks signs and a few traffic cones, in which case you might get away with it on an ironic basis). Lasers are where it’s at, such as this Mini DMX model that lets you fire out high-tech tunnels, squares, spirals, and 61 other effects. Read more

9. Ion USB Mixing Kit
Another USB mixer that lets you take your lightweight laptop out on the road, rather than heavy boxes crammed with vinyl or CDs. Costing under 100 quid, it uses a pair of virtual turntables on your laptop screen, controlled via a drag’n’drop interface. Read more 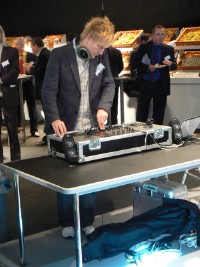 10. DJ Slow’s Nokia decks
Okay, so these were custom-built, so you can’t buy them. But when we ran into Finnish jock DJ Slow last year, we were mightily impressed by the way he was DJing using two Nokia N91 phones plugged into a set of decks. And even more so when he revealed that he was only actually using one of them – with the other being for show. Read more