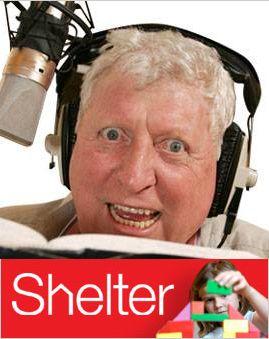 Former Dr Who (and Little Britain voice) Tom Baker has recorded a new version of The Kinks’ classic “You Really Got Me” as a charity single for Shelter.

The festive download-only single is part of BT’s Text Aid charity initiative, which sees the legendary Dr Who actor return as the voice of its text-to-landline service which converts texts sent to landlines into speech. From now until 8 January, BT will donate 2p for every text message sent to or from a BT landline, and all proceeds from the charity download, directly to Shelter.

On Christmas Day, a staggering 129,341 children in England will wake up homeless, and BT hopes to raise at least £100,000 to support Shelter’s vital work.

The track is available to download today for just 79p from 7Digital and from a range of online retailers including eMusic and iTunes. In addition, 2p from every text sent to or from a BT landline between now and 8th January 2007 will be donated to Shelter.

Wendy McMillan, general manager of BT Retail, said: “The Text Aid campaign is designed to offer fun and different ways for everyone to get involved in raising money for Shelter at this critical time of year.

“To get people into the sprit of the campaign we’ve brought back Tom Baker as the voice of our text-to-landline service and used his computerised voice to launch him as a virtual pop star, performing a new dance take on an old Kinks classic!”

Related stories: Cancer charity turns to text | Save the Children is first UK charity to enter Second Life | The search engine with a heart | Make money from your old mobile phone