Stephen Fry has quit social media site Instagram, telling his fans he was “hounded off” it by the press. The comedian and actor, who has a huge following on social media with 92,000 Instagram followers, said: “Newspapers, as ever, suck all the joy out of everything. Closing down. It was, briefly, fun. Bye.” In his description…
30th March 20157th July 2019 Chris Price Social Media

Tech fan Stephen Fry has become the latest celebrity to lend his voice to TomTom's range of sat navs. For £7.95 drivers can have the Black Adder star direct them down the nation's motorways, downloading to several compatible navigation systems….

Or at least it's making us lazy, opting for shorter words instead of long ones. 73% of us believe that Twitter and text messaging is changing the use of the English language, according to a survey presented in a…

You may have heard that the Windows 7 mobile phone operating system launched yesterday. In fact it was difficult to miss especially with the polymath that is Stephen Fry pitching up to say a few words – unpaid apparently (mind…

He's everywhere at the moment. Stephen Fry, the Jamie Oliver of the tech world, is now giving his time to Sky to promote the launch of its 3D TV channel on October 1st (just in case you'd forgotten). If…

To his credit Bacon was one of the first BBC radio presenters to realise that Tweeting was fantastic way of interacting with an audience. So he will often use his feed to ask his listeners questions, plug the guests on the show and encourage fellow tweeters to express their opinions.

A teacher, who tweeted while she taught, is to be investigated her employers after the Bute-based high school teacher posted up to 38 updates per day.

“Had S3 period 6 for the last 2 years…don’t know who least wants to do anything, them or me,” read one tweet.

“Have three Asperger’s boys in S1 class – never a dull moment! Always offer an interesting take on things,” read another. Argyll and Bute council have a policy of blocking all social networking sites in its schools.

It is thought that the unnamed teacher used her phone to send updates.
A council spokeswoman said: “Social networking sites are blocked in all schools as policy. This has always been the case and applies to all council staff and not just teaching staff.”

“The teacher in question is not facing disciplinary action, although the council is looking into the matter,” she added.

Even though the timing of posts appeared to coincide with school hours; “Depute came in while I was logging on.” Surely they’re at least going to confiscate her phone till the end of term!

Stephen Fry, who has gone from obscure advert voice-over man and trainee Peter Ustinov to become the WORLD’S MOST FAMOUS PERSON thanks to his embracing of the tech world and Twitter in particular, has, once again, done it.

He got stuck in a lift.

Fortunately, there was a mobile signal available…

Speaking in one of a series of lectures organised by the BBC to inform the debate over public service broadcasting, legendary actor and comedian Stephen Fry hit out at the BBC iPlayer downloadable content service. “There is this marvellous idea the iPlayer is secure,” he said. “It’s anything but secure.” 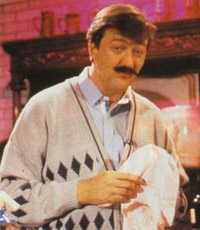 We already knew he was well up on the mobile phone scene, but now it turns out Stephen Fry is also loving his Eee PC at the moment too.

Writing with his customary enthusiasm, Fry’s latest Guardian column has him analysing the pocket-sized wonder-laptop in immense detail – and slagging off Microsoft’s Windows as “expensive, clumsy, costly, ugly, pricey” while he raves about Eee PC’s awesome little Linux build…