LOVEFiLM has grabbed the rights to stream ITV and BBC Worldwide content to their subscribers with access to their web-connected video streaming apps. A timely move with the imminent UK launch of Netflix looming, the deal will bring ITV shows…

Licensed by BBC Worldwide and produced by games developer Asylum Entertainment and global distributor Koch Media, Doctor Who: Evacuation Earth for Nintendo DS and Doctor Who: Return to Earth for Wii are set to hit the UK, Australia and selected…

Against a background of criticism of the BBC by commercial media rivals which have struggled to monetise online content, Lyons has told the corporation it needs to restructure its online content or face the consequences. The alternative could see a radical restructure forced on the BBC by a future government which may have close links to media owners.

"Beyond the core offer of news, sport, education, children's and the iPlayer, which parts of the online service are essential to the BBC's mission and which could be stopped?" asks Lyons inthe report. He also questioned the future of content not tethered to specific BBC programmes.

Some say that his 19th century views on environmentalism and global warming are pushing millions of viewers down the path of climate change scepticism, and some say that his incendiary views are designed to cause a stir and causes people like me to write about them… all we know is that he’s called Jeremy Clarkson.

If you’re a fan of party-political broadcasts for the Conservative party presented by ill-informed controversialists who probably do actually use the phrase “political correctness gone mad” without irony, then you’ll be delighted to hear that the BBC has launched a Top Gear YouTube channel.

BBC Worldwide has announced a deal which will see a range of the Corporation’s natural history, travel, and factual programmes placed on the Internet TV platform Babelgum.

The BBC is certainly keen to get their content out beyond the gogglebox in the living room. Last month, they put classic TV clips on MySpaceTV, they’ve put classic Parkinson and EastEnders on YouTube, and their iPlayer is booming, so it’s probably no surprise that they’ve now developed widgets which can be used on the desktop, on social networking sites, and popular blog platforms.

RadioTimes.com, BBCGoodFood.com, and TopGear.com, all now provide widgets which give regular feeds of the latest news and information. 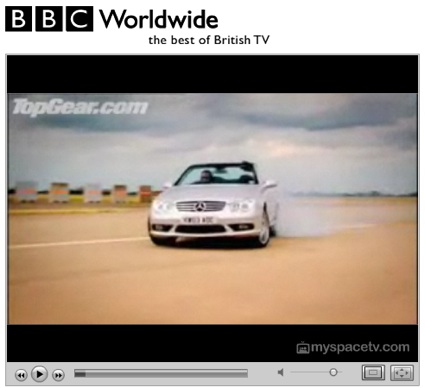 BBC Worldwide, ITV, and Channel 4, have today announced that they are set to launch a joint on-demand video service, offering a wide variety of both current and archival programming, next year. With a working title of "Kangaroo", the service…

BBC Worldwide has announced new content on its YouTube channel, as 54 of viewers' favourite EastEnders clips make their way on to the video sharing site. Clips include the "Frank seducing Pat naked" scene, which was apparently voted the fifth…