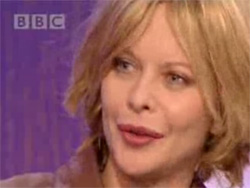 I never liked Michael Parkinson. He flounders when interviewing women, promotes rubbish MOR-lite singers, and thinks Billy Connolly is seventeen times funnier than anyone else in the viewing public. There, I’ve said it. Sorry mum.

Nevertheless, Parky does have his fans, and so they’ll be pleased about the BBC’s announcement that it’s showing some of his most famous chat-show interviews on the Beeb’s YouTube channel. Featured are the likes of Ewan McGregor, Dolly Parton, Dame Judi Dench, Kevin Spacey and Elton John.

More importantly, they’ve been good sports and put up his LEGENDARY interview with Meg Ryan. They won’t let anyone embed the videos though, so you’ll have to click the link below to go view them.