Forget Freddy Krueger; your dreams just got a new worst nightmare in the shape of the Gun O'Clock alarm clock. Built by the Bandai, the company responsible for Tamagotchis and Gundam mech toys, the clock won't stop its incessant…

I love my sleep. I love my Tetris. But the two just should never mix; playing the classic Gameboy game while doozy will leave you with a blocky mess of a screen before you can even begin to hum…

We love the winter; it brings us closer together over the festive period, and all the best films are on the telly. But boy, are those cold, dark mornings a drag. So much so that many people suffer from what…

Part of me really loves my under-powered alarm clock. It's so quiet that it often helps lull me into another wave of R.E.M sleep rather than fire me up for a day's work. But when you've got an early appointment…

August International have today announced the launch of the MB300 Mini MP3 Music Box. The MB300 is compatible with SD/MMC cards and USB sticks, playing back any of your MP3s stored on the devices. There is also a 3.5 mm…

One of the quirkier stories to come out of CES this year was the partnership between Digital Blue and LEGO which will see a number of kid-centric gadgets produced with the iconic plastic brick look.

This isn’t build it yourself, unfortunately, so don’t think you’ll be able to buy a box full of LEGO pieces, a CMOS sensor, LCD and a few buttons and create your own digital camera. It’s just the look, rather than the actual coloured blocks, but that’s probably just as well as it would be pretty irritating to drop said camera and have it break into a hundred pieces…

When the people at alarm clock manufacturer Roberts wake up in the morning, they like to do so to a choice of music. Not just some random bleepy-bleeping bleep alarm, or some scratchy FM radio static.. No. They want music. And they want to be able to specifically choose the track to wake up to. Something like ‘Beautiful Day’ by U2, perhaps.. or ‘Wake me up before you Go-Go‘ by Wham, maybe. Anyway, they appear to want us to have the same level of choice too, because they have invented a machine which allows us to do that very thing.

Step forward the ‘Sound 40’, an all new ‘bells and whistles’ alarm clock designed for the 21st Century individual who likes bells and whistles. Check out it’s impressive audio array: DAB radio. In-built CD player. SD media card player. MP3 and WMA playback. An input source for your iPod (or other such music player). And oh yeah, it still has a buzzer, presumably for those poor lost souls who can never decide on anything. 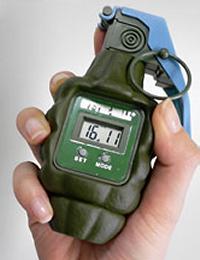 Explosives have no place in the modern bedroom. You can tempt someone back to your place by telling them you’re dynamite in the sack, but if that turns out to be actual TNT, you’ll be sleeping alone.

However, the Hand Grenade Alarm Clock is just about acceptable, seeing as it doesn’t actually wake you up by exploding in your face. 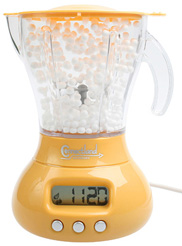 I’m sure that if Brando ever went into liquidation and had to sell off all their stock for CRAZY BRANDO WAREHOUSE prices, the whole internet would probably crash, due to people plugging all manner of USB gadgetry into their computers. The internets would all blow up 🙁

Take, for example, their latest gizmo, the USB Blender alarm clock. Firstly, who has their computer on their…