The messaging app space is increasingly crowded: Not only is there the likes of iMessage and Google Hangouts for managing your text messages, but other services want to do away with SMS entirely. Instagram, WhatsApp, Vine and tonnes of others are all becoming increasingly viable platforms to replace the messaging in your life. So why would we need another? 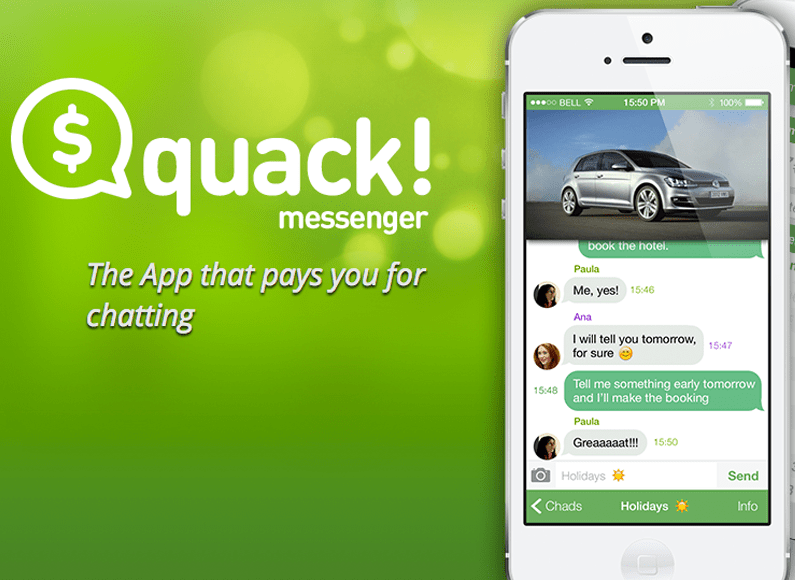 Surprisingly Quack is not like “Yo” – but is a fully featured messaging service.

The difference with Quack messenger is that when you use it, you get paid.

The concept behind the business is quite clever: Advertisers want people to look at their adverts, so creating an app that people will use often means more eyeballs on the app – which means more advertising revenue. Better still – by sharing a small cut of the advertising proceeds with the user you’re incentivising them to ‘engage’ with the adverts and be willingly advertised too. Advertisers using the app can even offer larger videos for users to watch, if they’re super keen. For the end user, not only do they have a messaging tool but they can also earn some extra pocket money every month.

The company isn’t saying much about how much money it will pay out exactly: it will likely be based upon how many advertisers it has rather than a fixed amount for usage. Just don’t expect to make your fortune through chatting on Quack.

The challenge for the company is going to be growing the userbase: reaching a critical mass of users so that Quack is the go-to app is going to be important, as it will create a virtuous cycle of users joining because their friends are users, and their friends joining for the same reason. This network effect is why the likes of Snapchat and WhatsApp were able to grow so fast. It is for this reason, perhaps, that the company aims to incentivize users by offering commission on signing up new users: If you get a friend to sign up, you’ll get 5% of their earnings too. Can I be the first person to coin the phrase “Quack Dealer”?

Payouts are also given every month and can be paid via Paypal or in the form of a donation to the WWF (the Pandas, not the sweaty men pretend fighting), which is nice too.

So will you be checking out Quack? Or are you going to duck out of this social media experiment? Let us know in the comments.