Its finally official! Amazon has just announced the company’s first foray into the mobile phone business, with the Fire Phone. And an intriguing device it is too. Read on for all you need to know about the new phone. 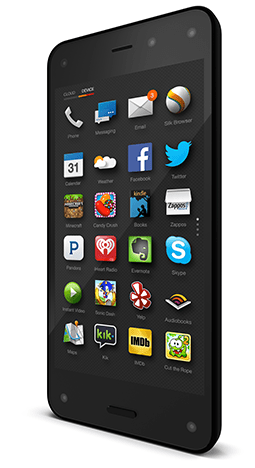 I’ve heard a lot about this new Amazon phone, what will surprise me?

Well.. not much, really. It’s pretty much exactly as we expected – 4.7″ screen covered with Gorilla Glass 3, quadcore 2.2ghz processor, complete with Adreno 330 GPU and 2GB of RAM.

It’s a little bit like an iPhone – there’s glass on the back too, but the sides are made of rubber.

The camera is a nice 13MP – and sports an f/2.0 lens and Optical Image Stabilisation, which Amazon’s Jeff Bezos claims is better than the one found in the iPhone 5S and Galaxy S5. Amazon are also throwing in free unlimited photo storage from Amazon Cloud Drive. Which is better than Apple’s promise of fairly cheap storage for iCloud.

So much, so rumoured – but there was a couple of things.

There’s a special hardware button on the side of the phone for the camera and a new service called FireFly (more on that further down).

And interestingly, there’s what is claimed to be “tangle free” headphones included in the box. The earbuds are apparently magnetic, and and have flat cables.

Apparently the phone has been optimised for “one hand use”. Make your own jokes.

Presumably lots of Amazon services are built into the phone?

Yep – if there’s something that has had Amazon’s logo slapped on it in the past, there’s probably an app or feature for it.

Kindle, Amazon Music and Amazon Instant Video all feature. Bezos was keen to show off the “X-Ray” functionality where you can use the phone as a second screen whilst watching videos on your TV (via Miracast or Fire TV, presumably), which will show you relevant related information, like IMDB entries for the actors.

ASAP, from the FireTV also features – this will essentially “pre-cache” videos on your phone that it expects you to watch, based on Amazon’s algorithms. That means even before you hit play on the next episode of that show you’re waching, it’ll be buffered and ready to go without any loading times. This is only expected to work for Amazon’s own Instant Video, and not Netflix, etc.

Mayday, which can be found in Amazon’s Kindle Fire tablets is also available on the phone. This is tech support like no other – in one button press it will get you into a live video chat with Amazon’s trained operatives, who can take control or draw on the screen of your device to show you what to do. It’ll even work over 3G/4G as well as wifi.

Can I run other apps?

Yep – though obviously Amazon’s services take the centre stage, the Fire Phone runs Amazon’s custom fork of Android, meaning you’ll be able to run any Android apps you download from Amazon’s App Store. So this means you can still get hold of your Netflix, Spotify and so on – even if Amazon offers its own alternatives.

The one company that will probably be missing is Google – Gmail, YouTube and so on were notably absent from the Kindle tablets as Google don’t support Amazon’s Android variant. 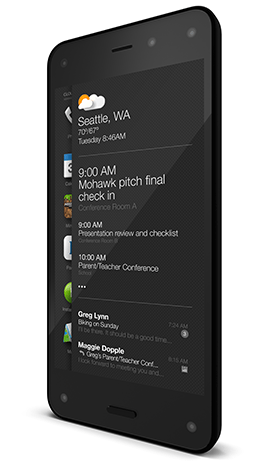 This was rather clever. Obviously being Amazon, they want to sell you stuff. So within one button press on the special button on the side of the phone it will load up your camera and start listening.

The idea is that you can scan products, like books or whatever, and it will look them up on Amazon and offer you the chance to buy them. Whilst this won’t make Waterstones very happy, it does seem rather useful. Not only is it for buying stuff, but can be used for other information too. 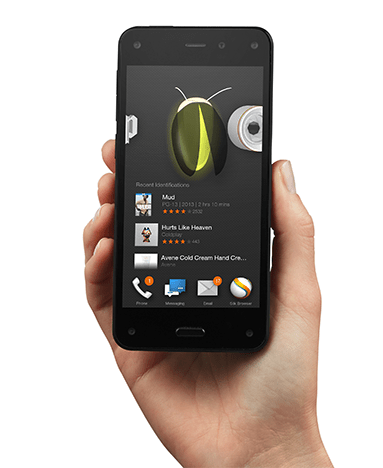 For example, it’ll figure out what track is playing, much like Shazam can – and can even identify TV shows. What’s most interesting about this is that third-party apps can plug into it, meaning that if you have MyFitnessPal installed and scan a bag of crisps, it will tell you how many calories are inside. Similarly, if you’re at an art gallery and scan a painting, it will load up information on it from Wikipedia. It’ll even recognise email addresses and phone numbers, so you can add them straight to your contact book or call them. If lots of apps can plug into this then reality is about to get a whole lot more augmented.

Bezos claimed that the phone can recognise over 100m things – and the technology behind it sounds rather clever. Like Siri it works in the cloud, so your phone will need to be connected – apparently the software will chop down the image to bear essentials (like text), so not to waste your data allowance, and it will use what Bezos called “semantic boosting” – meaning that it will try to figure out what it is looking at, to fill in the blanks. The example it gave as a phone number where an 8 was obscured by sunlight to look like a 3 – but it figured out it was an 8 because it knows that there’s no area code with a 3 in it. Very clever if it works.

What’s the deal with these four cameras?

Ah yes, the long-rumoured four front-facing cameras for tracking your movements. It works just like Kinect – the phone tracks your head, and will apparently know where it is at all times. It only needs two cameras to do it, but Amazon has included four, so you can hold the phone however you like. 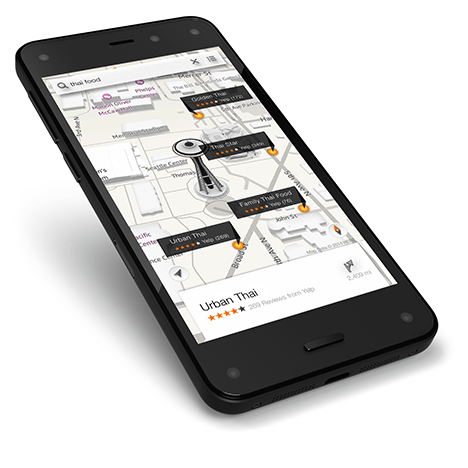 What its for is the “dynamic perspective” interface, that will shift things around on screen to optimise them for how you’re looking at the screen. This means in apps like Maps you can have 3D models of buildings popping up, but you can then tilt the phone to look behind them. It also means the phone do some clever gesture-type stuff – for exampe, automatically scrolling webpages or your books when you tilt the phone. Don’t worry – its also possible to the lock the tilt or even set the tilt to auto – so you can have it scroll at whatever speed you like. Apparently the technology is open to developers too, so it will be cropping up in games and stuff too.

What’s astonishing is that this sounds like a lot of work for not loads of gain (yet, anyway). The way it works is each camera has a 120-degree field of vision, and Amazon have spent ages training the software to recognise faces. The company has fed in thousands of facial images (no word on where they were acquired) to train it, and Bezos even showed a video of a creepy mannequin head looking at a phone being used to train it.

Because the cameras will know where your face is too, it will also know how far away you are thanks to the cameras working in 3D – so the software is clever to work out what size the face it sees is, so it can reject false positives like faces on newspapers.

How well this works, or how it will affect the battery life remains to be seen – but it is certainly an interesting innovation.

Anything else worth mentioning?

The home screen has had a bit of a redesign from the Kindle tablets too. You can choose to either go for a standard “grid” layout of your apps, or you can scroll through them in a carousel – which can show you a relevant widget underneath the icon. So, for example, on your emails rather than have to go into the email app it will instead display your latest messages right there. 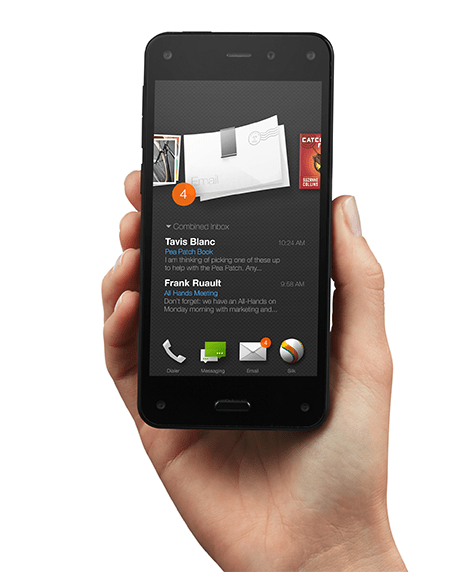 There was also a nice addition to the volume controls – if you go to silence the phone, you can also choose to silence for a certain amount of time. For example, you can set your phone to silent for three hours for that meeting you have, and it will get louder again after so you don’t miss any calls.

When can I get it and how much will it cost?

The phone is due for launch on July 25th in the US – unfortunately we don’t have a UK date yet. Presumably Amazon are still trying to nail down deals with the networks over here. Stateside though, the phone will come in 32GB and 64GB flavours for $199 and $299 respectively (exclusively on AT&T), so that should give us some idea of how much it will cost when it launches here. Amazon are throwing in a year of Prime for free too… something we very much hope will make its way over here too. We’ll keep you posted.