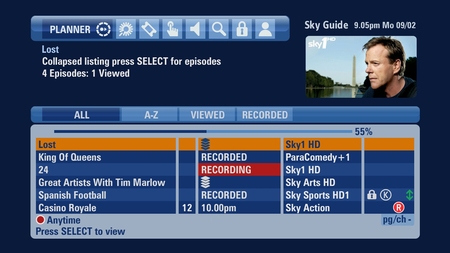 The message boards over at our Shiny friends HDTVUK have been alight with readers venting their spleens over the new-look Sky + HD Guide, which completed its nationwide roll-out last week.

Many of you have been complaining that the new Sky Guide isn’t up to scratch, either running too slowly, not being particularly intuitive or with text too small to read.

SERIOUSLY AWFUL the greatest injusticed (sic) is the fact that non-HD (lower paying customers) have the classic menu which we have all loved for the past decade. A CLASSIC option would be much appreciated.

James followed up with a similar sentiment:

I thought I would give it a go for a week before I complained as I thought it would grow on me. I was wrong. I still hate it. I want the old one back. The old one was straight forward and easy to use. This one is just a mess. It really puts me off watching TV.

Some readers have had such difficulty reading the new guide that they have contacted the Royal National Institute of Blind People, believing the new guide to be an affront to accessibility for the visually impaired.

Your complaints have not fallen upon death ears completely however! A Sky customer services representative today confirmed to HDTVUK that visually impaired Sky viewers will be able to revert back to the previous Sky + EPG if they wish. However Sky + HD subscribers will have to downgrade to a Sky + box in order to get the old guide back. This may be however just a temporary solution, as all Sky boxes, including earlier models, are expected to take on the new look guide sooner rather than later.

What do you think? Should all Sky +HD subscribers be given the option to revert back to the previous guide? Or are the complaints all smoke and no fire, with the guide being well suited to your needs?

(Thanks to HDTVUK reader Mark for the tip!)