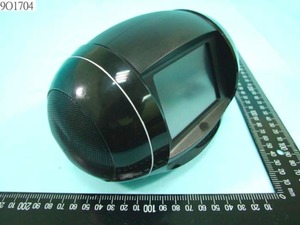 The FCC have picked up on a brand new “multimedia router” from Qisda, which looks to have some rather unique features for this sort of device.

Rather than just sorting out your broadband connection, the as-yet-unnamed router also has a touchscreen and built in speaker, allowing users to access widgets like YouTube and to tune into internet radio stations. If you happen to have your router in your bedroom, the Qisda box will also double up as a clock radio.

Users can store files on the router’s built in memory, although there is no access to your local network, which seems a bit of an oversight for a device like this.

While it’s good to see its regular router functions will handle 802.11n just fine, it’s more than a little stingy on Ethernet connections, with just one spare port on the back.

It’s certainly an intriguing proposition, though it’s difficult to ascertain yet how well equipped the router is to deliver on its promised content. More news on this one when we have it.