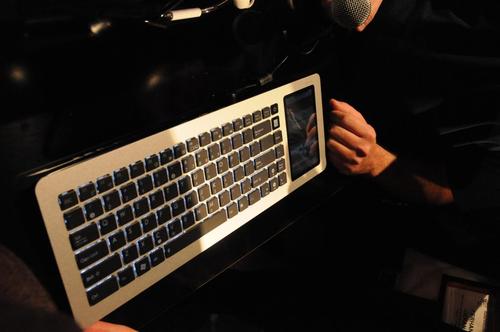 The most puzzling gadget from CES 2009 looks like it’s about to be up for grabs as word spreads that the Asus Keyboard will be on sale by the end of June.

The computer-in-a-keyboard device created more of a confusion than a storm when it was brushed over fairly casually at the Asus press conference in January. So, just in case your desktop isn’t enough, the Taiwanese innovator is selling a finger tapper with a mind of its own.

It comes with an embedded 5-inch, 800 x 480 pixel touchscreen, and it runs XP on an Atom N270 CPU and a 32GB SSD. It also happens to rock 802.11n wirless, an HDMI-out port, Bluetooth, a set of speakers and even has a microphone as well. I think they’re just doing it to make everyone’s computer feel really dated. “Look,” they’re saying, “even our keyboards are better than your tired old machine.”

Of course, the big question is what exactly am I going to use the thing for? I look forward to the demonstrations.

One thought on “Asus Keyboard to hit the shelves in June”