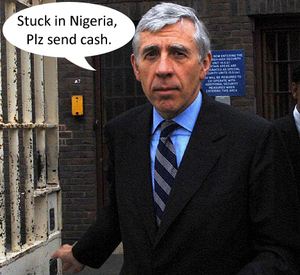 The UK government’s Justice Secretary, The Right Honorable Jack Straw MP, has been hacked by Nigerian fraudsters, who sent out hundreds of emails to his constituents and Government figures asking for cash because he’d lost his wallet on charity work in Africa.

Straw says that everything’s okay because it was only his constituency office that was hacked, not his official Government address. I’m sure that’ll make his constituents feel better, who’ve apparently been calling the office asking about the email. Only one replied, and his or her Hotmail account has since been suspended by Microsoft.

One thought on “UK Justice Secretary Jack Straw gets hacked”