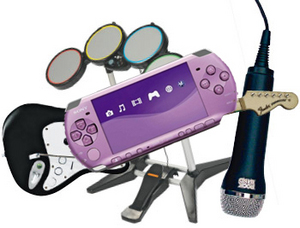 One surefire way to start a fight on the internet is to say that games machine x is not as good as games machine y. If you average out opinion right now, most people would probably say that x = Sony PSP and y = Nintendo DS. I’ve already made the blood of many a PSP fan boil but that’s probably the way of it.

Anyway, while Nintendo is upgrading the DS, Sony has decided to release a good lot of games for their handheld to reassure people that actual x=y rather than x – y < 0.

So, you can expect to see LittleBigPlanet, Motorstorm: Arctic Edge, Buzz!, Assassin’s Creed and, best of all, Harmonix’s very own Rock Band Unplugged some time fairly soon. The lilac coloured PSP is all about the special edition that comes with Hannah Montana. Can’t wait for that one.

In the mean time we await the first reports on the DSi.