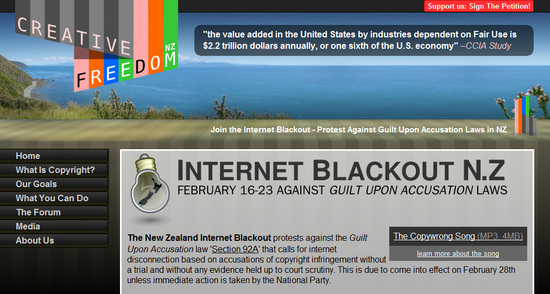 New Zealand, as we’ve previously reported, wants to take a hard line against people accused of copyright infringement by cutting them off without any attempt to ascertain whether they’re actually guilty.

The copyright owners argue that this is necessary, because successfully prosecuting someone is a time-consuming and costly business. Of course, copyright owners have a history of falsely identifying acccused infringers.

As a result, there’s been uproar in the country, with many across the world “blacking out” their social network profile pictures to draw attention to the law, due to come into force this Saturday (28th Feb 09).

Thanks to their actions, and the media spotlight placed on the country from across the world, the law has now been postponed. Although it’s only postponed for a month, it’s still a major victory for consumers, who’ll now have a chance to input on a code of practice for the implementation of the law.

If no agreement is reached on the code of practice, then the law will be suspended further, and the government has also promised a review of the effectiveness of the law six months in, to see if it’s had any effect on volumes of filesharing. My guess? It won’t.