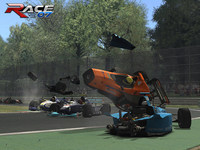 Poor Gill and Ken Murdoch. They’re aged 54 and 66 respectively, and they’ve never played a computer game in their lives. Imagine their shock when they opened a letter from law firm Davenport-Lyons that accused them of downloading an Atari game called Race 07, at 3am on November 26, 2007.

The letter demanded immediate compensation of £500 plus £25 costs, with the threat that that figure could rise into the thousands if legal action began against the couple. Over to Ken:

“A Swiss investigator had identified us as the downloader of this software at 2.59am on November 26, 2007. At 10am that day, I was at a government conference. The thought of me being up at 3am was ludicrous – and there are no kids in our house. The whole thing’s been a nightmare. We have never even played computer games.”

The Swiss investigators he mentions are called Logistep, and have been accused of doing some very iffy things. In France, a lawyer who worked for Logistep was banned from practicing law for six months, and in Switzerland, it’s been suggested that the company has violated the law.

It’s believed that the pensioners were identified by their IP address. What’s likely is that an enterprising young file-sharer hijacked their IP and ghosted it to mask his or her own downloading habits. It’s a fairly well-documented procedure, and common among heavy sharers.

For that reason, IP addresses don’t really satisfy the proof a court needs. The couple don’t have a Wi-Fi network, so it’s impossible that someone got in that way, but there’s absolutely no evidence that the couple was using the computer at the time, or that the name of the file downloaded accurately described the contents.

Davenport-Lyons, by sending out letters like this, are terrorising innocent people to make a quick buck. The Pirate Bay, a top Bittorrent tracker, routinely inserts random IP addresses of people that don’t have anything to do with P2P, to the list of people downloading files – just to make life harder for firms sniffing around.

Piracy won’t be beaten by heavy-handed lawsuits. It’ll be beaten by providing an experience that can’t be infinitely replicated. As I argue here, it’s far more important to simply make great games than it is to invest in costly, hated DRM systems and lawsuits.