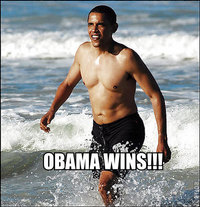 Later today, Barack Hussein Obama will be inaugurated as President of the United States, and thousands of spammers are using it an opportunity to.. well… do what they do best. Emails are circulating with subjects like “Barack Obama refused to be president of the USA” complete with links to phishing sites and viruses. Symantec warns of one in particular called W32.waledac.

It’s not the first time something like this has happened – the people who run these spam networks are well in-tune with current events and often use major holidays and other big world events as social engineering to get people to click links that they might normally be wise to. So be careful, you hear?