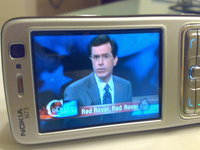 If you’re dead keen on squinting at a tiny phone screen to see watch TV, and a 3 subscriber, then you’ll be excited by the announcement this morning that Sky’s Mobile TV service will be coming to a handset near you in the near future. You’ll get Sky Sports channels, Sky News, At The Races and CNN, for a monthly fee of £5, or a daily fee of £1.

It seems that you’ll need a data package to receive the content, too, which will set you back £2.50 a month for 10MB. I suspect, however, that you’ll need substantially more than 10MB if you’re going to watch the service for more than a few minutes.

This announcement adds 3 to Vodafone, Orange and T-Mobile, who all have deals with Sky already. Only O2 is a major standout, but they have the BBC iPlayer on the iPhone. The iPlayer’s also available on the N96, which is out on all networks.

I’d be very interested to see some usage figures for Sky’s service, to see whether people actually want to watch TV on pocket-sized devices. People always give the example of checking sports scores, but I rather suspect that it’s faster to visit a news site on mobile internet to check the score.

Still, there must be some market for it, or Sky wouldn’t be expanding to so many networks. Have you ever had a desperate desire to watch TV on your mobile that mobile internet can’t quench? Let us know in the comments.