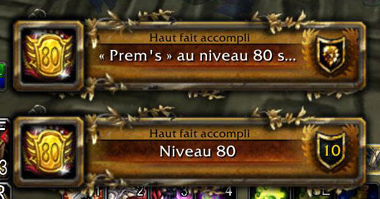 In case you missed the reports of the ‘biggest entertainment launch ever’ last week, World of Warcraft has just launched its second expansion pack – Wrath of the Lich King. It raises the level cap to 80, and one French player – Nymh – managed to power through the ten levels in between in just 27 hours.

To answer a few of your questions – no, he didn’t take any breaks, he’s 21 years old, and he is currently employed (though took a few days holiday for the release of the expansion). He was playing as a female human warlock, demonology spec.

Of course he didn’t do it quite on his own – he had a priest healing him, and picked a spot where monsters respawn every 30 seconds or so. He also had someone teleporting him to cities so that he could train new skills. Even with all those things, 27 hours is a ridiculously short space of time. I’ve been playing on and off since release, and only got about a third of the way to level 71. Evidently I should be trying harder.

If you want to know more, there’s an interview with Nymh here, you can see his Armoury profile here, and there’s a screenshot of the epic moment here. I’m impressed. I wonder if he’ll tell his colleagues, though – do you share your MMO (or even just gaming) habits with your co-workers? Let us know in the comments.