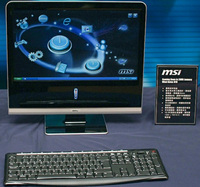 Looks like MSI’s been doing a bit of tech blog espionage again, revealing plans to launch a range of “all in one” PCs with a touch screen and Intel Atom combo that appears extremely similar to the one Asus showed off recently.

Three separate all-in-one MSI Neton models have been revealed – the M16, M19 and M22. I’ll now give you a bit more information about all three, as you can’t work much out about them from those boring model names.

They all run XP Home and have touch screens so you can get fingerprints over the bit you look at all the time. Touch screens on desktops are a terrible idea. The M16 is the smallest model, with its Intel Atom processor stuck into the case of a 15.6″ 1366 x 768 monitor. The M19 features an 18.5″ screen running at the same resolution, while the M22 if the “Full HD” option, giving you a 22″ screen capable of displaying video at 1920 x 1080.

I’m not sure which planet MSI is sourcing its Intel Atoms from, though, as the Atom-powered laptops I’ve used recently have struggled to operate a browser with more than two tabs open at the same time – 1080p movies might be a little bit beyond its capabilities.

The Chinese text there promises the Netons will arrive in January 2009, so feel free to make your own guess as to when they might hit the UK. I’m going for April 2009!