I’ve just returned from a delightful morning with Yahoo!, who gave me a preview of all the exciting stuff they’ve got planned for 2009. They’re innovating in several key areas, but the push is on making the user experience more social and more open.

Yahoo! have had a difficult year, after all the shenanigans with Microsoft back in February, but it seems like they’ve come through it with a renewed sense of purpose. The Yahoo! homepage, Yahoo! Mail, Search, and Mobile are all being ripped up. Let’s go through those in turn, starting after the jump. 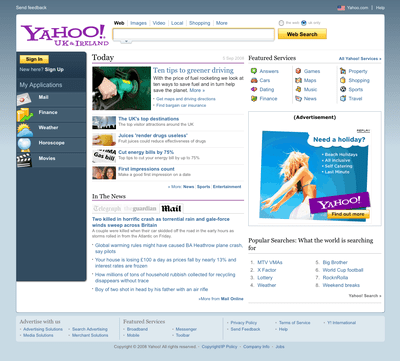 This is the new Yahoo! homepage. It’s pretty different to the current incarnation, which you can see here. The most noticeable change is the addition of plenty of white space. Feedback from consumers in European markets was that the current homepage is way too busy. As a result, they’ve cleared things up considerably.

Secondly, you’ll notice a big grey bar on the left hand side. This is the “My Applications” dashboard, and it allows you to add stuff to your homepage. You can add mail (Yahoo, Gmail or anything else), video, weather, maps Twitter, Flickr, and all sorts of other applications. The best bit is that developers can code their own applications for this space. Thumbs up.

Lastly, you’ll also notice headlines from a variety of newspapers in the central middle column. These differ based on the country you’re in, and will show the latest headlines, linking through to each newspaper’s site.

I asked whether people will be able to customize which newspapers show up – I don’t know about you, but I’m not really bothered about what the Sun has to say about things. The answer was that they hope to add functionality to let you put any RSS feed into that space.

Yahoo! is currently bucket-testing the new design, so if you go to the homepage and hit refresh enough times, then you’ll eventually see it. Don’t count on them running an opt-in beta, though – I was informed that the kind of people who opt-in to betas aren’t really representative of their larger market, which is fair enough.

Yahoo! hope to launch the new homepage “soon”, which presumably means 2009. I like it. It might even convince me to make it my homepage, instead of Techmeme, but it very much depends how customizable the other bits of the page are.

Yahoo! Mail
250 million people access Yahoo! Mail each month. They say they deliver more messages in three months than Royal Mail, UPS, Fed-Ex, and the US Postal Service combined deliver in a year. As we know, sadly a lot of that is spam.

Yahoo! is therefore working on a “smarter inbox”. They want to highlight messages from people that you email a lot, which they’re calling your “connections”. These messages will show up on the mail homepage, whereas random other email won’t – you have to click through to the inbox for that.

There were also glimpses of a facility called “sharing spaces”, which seems to indicate some sort of drop-box that you and your friends can access. When I asked about it, though, they locked up and wouldn’t tell me anything. Pity, because combined with the unlimited storage that Yahoo! Mail offers, it could be very useful.

Yahoo! is going to be launching APIs for the mail development platform, so developers will be able to build on it. As an example, they showed us a Flickr application, which allows you to attach Flickr photos to emails. The plugin shows the recpient a preview, and they can click through to see the picture bigger on the Flickr website.

Lastly, and I apologise for not having a screenshot of this, there was a hint of Facebookyness in the new look Yahoo! Mail. In the bottom right corner of the mail homepage there was a sort of news feed, which showed contact activity from other sites on the web. This kind of integration could really bring lifestreaming sites like Friendfeed and Plaxo Pulse into the mainstream.

Search
Yahoo! knows that search is important, even though they have a very small share of the market. 3.37% at latest count. Yahoo! want to become more than just “ten blue links” – they want to provide the “world’s best search experience”.

Examples of innovation they showed us included rich media plugins, brilliantly called “monkeys”, which you activate for certain sites and will show special info in your search results. For example, the YouTube monkey will play video in your results when it’s active, or a Yelp plugin will display restaurant reviews.

Hundreds of “monkeys” are available, but at the moment you have to activate them manually. In the future, Yahoo! want to activate these monkeys by default depending on the context of your search.

Speaking on context, Yahoo! are very interested in “task completion”. They show related searches, but they also suggest related “concepts”. It’s a bit weird to get your head around, but it shows associated data with the thing you’re searching for – for example “Fleetwood Mac” comes up with you search for Colbie Caillat, becuase her dad produced Fleetwood Mac in the 80s.

Lastly, Yahoo! offers a functionality called BOSS, which (doesn’t quite) stand for “Build (your) Own Search Service”. This gives anyone access to the Yahoo! search backend, but it’s a bit better than a Google Custom Search equivalent. Companies can re-rank results, take some out entirely, blend in particular pages of their own, and basically just make their own tailored search engine.

Mobile
Yahoo!, like everyone else, sees the future of the web as mobile, calling the opportunity “massive”. They’ve got two very interesting mobile search products that they showed us.

The first is called OneSearch. It’s currently an S60 application, and sits at the bottom of your home screen as a search box. The clever bit is that when you search, it tries to give you “answers”, not normal search results.

For example, if you searched for a football team, then it would display latest scores and fixtures, as well as sports news featuring the team. A search for a flight number will give the status of that flight, as well as weather, traffic and travel info, and restaurants at the flight’s destination.

OneSearch offers completion for common searches, so your little thumbs don’t wear out, as well as voice input! I’ve bolded that because I think it’s exciting. You can say what you want to search for into your mobile, and it’ll find it for you! Great innovation, and perfect for mobile. Nice one, Yahoo!. 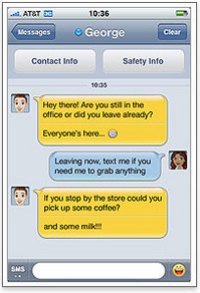 Yahoo!’s other big mobile product is called OneConnect, which was shown to us as an iPhone app. It’s Yahoo!’s take on the address book, but it’s more than that. It takes your social graph – the connections you’ve established in email, IM and other places – and puts it on your mobile, including a news feed with what your friends have been upto across the net.

It also offers “simple” messaging. It can IM, email, Twitter or SMS someone depending on their connectivity status, and it’ll pick the best one for the task for you. It’ll even thread the conversations between all three mediums, which is sure to confuse your friend, but is mightily useful for you. More info on OneConnect is here.

Both OneSearch for S60 (minus voice search) and OneConnect for iPhone are available now, but Yahoo! hope to roll both services out across as many platforms as they can, starting next year. Both are pretty powerful mobile tools, and I look forward to seeing whether they show up on Google’s Android platform or not.

Conclusions
As the venerable Andy Merret just said to me on Skype, Yahoo! always feel like they’re playing catch-up to the big boys, Microsoft and Google. With the level of innovation displayed here, however, they’re really starting to compete on a level with the larger players.

Yahoo! has a long way to go, still, but they’re making big strides, and I’m looking forward to the release of the homepage in particular. Yahoo! may well be on the way up again.