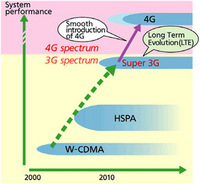 LTE, or “The Long Term Evolution of 3G” is a technology that transmits data over cellular networks, and competes with Wi-Fi and WiMax for the future of wireless data transfer. LTE, however, has been given a big boost today, as 16 huge technology companies have all agreed to embed the technology in future devices.

A second wave of releases will follow at a later, but unspecified, date, and will encompass fridges, televisions, cars, cameras, penguins and other random things. One of the people developing LTE said: “While there will always be a place for Wi-Fi connectivity, the great merit of mobile broadband might be that it liberates the user from the spatial tyranny of the so-called ‘hotspot’.”

Harsh words. We’ll see LTE roll out over the next couple of years, but whether it’s a credible alternative to WiMax depends on the availability of those tyrannical hotspots, as well as LTE coverage across major cities. Is this the next Blu-ray vs HD-DVD? Perhaps…