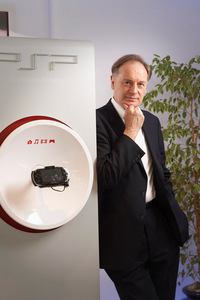 Sony’s rigorous firmware updating schedule is marching further forward, with the company today announcing new updates to PSP and PS3 – making them both marginally better than before.

The 2.50 update for PS3 will add in support for more voice chat features via the official PS3 bluetooth headset, better integration of Sony’s 100% original “Trophies” feature, plus the quite superb ability to capture screenshots while playing certain games. This will help the internet compare Xbox 360 and PS3 games in more detail than ever before.

As for PSP, the little PlayStation will be able to access the PlayStation Store via wi-fi after being updated to v5.00 – letting gamers buy and download games directly to PSP, a feature that we’ve been gagging for since Day One.

Both updates are out for both consoles later this month. In related “PlayStation family” news, Sony chief Kaz Hirai has once again said there will NOT be a PS3 price cut before Christmas. We’ll believe him for once, as he was talking to the FT and if he lied to the FT there’d be BIG TROUBLE.

Related posts: Dual Shock 3 on a PSP 🙁 | As was foreseen