Samsung have given us some details about the MP3 players they were showing off at IFA – the Q1 and the U4. The Q1 works with the iPlayer, and the U4 is inspired by “colour gradation on litmus paper”.

Let’s take a look at the Q1 first. Samsung reckons that it’s the player with the best picture and audio quality that it’s ever made. It’s also the first player they’ve got that works with the iPlayer. Stuff you download on your PC can be pushed to your player and then you can watch and/or listen to it wherever you go.

The Diamond’s also got a bunch of those allegedly sound-enhancing technologies that you’ll also find on many players from Creative. I still hold that they just make your music sound *different*, rather than better. It plays all sorts of files including OGGs and FLACs, as well as the more traditional MP3 and WMA. Video-wise it supports WMV and MPEG4. 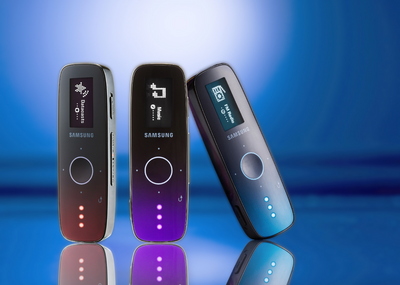 Then there’s the U4. It’s much smaller, and only comes in 2GB and 4GB capacities. As previously mentioned, its colour gradation is based on litmus paper. Remember? That stuff at school that changes colour based on the acidity of the substance it comes into contact with?

It only has a dinky 1″ screen, and doesn’t support FLAC like its older brother, but does come with the audio improvement technology mentioned above. It comes in Rose, Purple and Blue, and will cost you £30 or £40 depending on whether you plump for the 2GB or 4GB model.

So there you go. Two new MP3 players from Samsung. Both of them rather snazzy. Available on Monday – the 20th October from “selected retailers”.