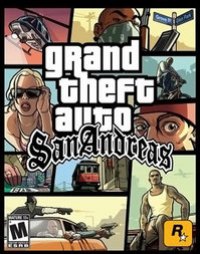 The game that launched a thousand lawsuits, Grand Theft Auto: San Andreas, will be released next week under Microsoft’s “Xbox Originals” service, which lets you get older games for cheap. It’s like the modern version of those ‘budget’ games that used to cost five or ten quid, but were a few years old.

On the one hand, it’s a little bit sad that such an impressive and enormous game has been reduced to the status of a cheap downloadable add-on, but at the same time, it might mean that people who missed it the first time are inclined to check it out. You won’t get a map with it though, sadly. It’s the mark of a good game, that – if it comes with a map.

It’s not going to look incredible on your Xbox 360, especially if you’ve been playing the more recent GTA IV lately, but the story of CJ and the Grove Street Families, along with the awesome early 90s soundtrack, will still be as compelling as it’s ever been, echoing the real LA’s gang problems of the early 90s.

Rockstar have long been quite fond of giving their old games away, or selling them much cheaper when they start shifting fewer units. GTA and GTA II are both freely downloadable, and this means that only GTA III and the incredible GTA: Vice City remain still at full price.