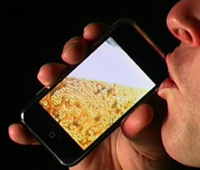 The Carling iPint app is apparently little more than a shameless rip-off of Hottrix’s iBeer, according to the man who created iBeer – and is now suing the iPint makers for £7m.

Steve Sheraton, who came up with the original accelerometer-powered beer-drinking illusion app that we have been assured is VERY HILARIOUS after drinking three real beers, claims that representatives of brewing group Coors asked him if they could license his creation for use as an advertising tool. Steve declined, but the major corporation went ahead and created its iPint clone anyway.

It is a classic case of The Man trampling over the individual, especially as the brewing super-chain is giving iPint away for free on the App Store, therefore denying poor Steve the $3 he earns each time someone downloads iBeer on a drunken impulse. Good luck, Steve, but if they offer you £10k out of court, take it. £7m is perhaps a bit ambitious.