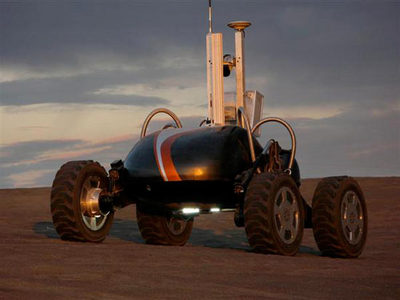 Pictured above isn’t a new concept car from Ferrari or whoever, but a new Moon rover designed by Carnegie Mellon University. And it looks pretty damn cool. It even has a cool name – the Scarab.

Whilst Mars may have Spirit and Opportunity plodding along like dorks, collecting samples and taking photos, the Moon may soon have this beast tearing up the craters – and I don’t just mean that in the hyperbolic sense, as it is designed to get at the minerals a metre below the surface on the dark side of the moon.

There was an obvious dilemma though – how do you power something like that without the benefit of solar power? The designers have come up with a simple solution: nuclear power. It can only be a matter of time before the hysteria begins and the more-alarmist media start to claim that “NUCLEAR SPACE ROBOTS ARE LOOKING DOWN ON US” (obviously the Dalies Mail and Express would append “AND ARE TAKING OUR JOBS” on to the end of that headline)

The rover itself is designed to look for hydrogen – something that we’re going to need to get hold of if we ever want to colonise the moon – and the good news is that there should be plenty of time to do all the work, as the radioactive batteries will last for ten years.

At the moment it’s still undergoing testing on volcanoes in Hawaii – I guess the scientists need to check whether or not it is “rad” enough.