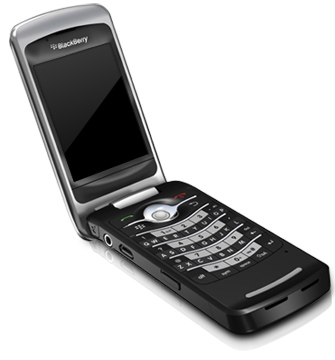 This is the new Blackberry Pearl smartphone from RIM, and *gasp* it’s a flip! Previous candybar models in the Pearl range have attempted to marry a full qwerty keyboard into a smaller form factor than other Blackberry models, creating a Blackberry/regular phone hybrid, but this is RIM’s first go at putting it into a flip phone.

You might think that cramming a full qwerty keyboard into a small form factor might make things a little cramped, but we have a couple of Pearl users in the office here, who claim differently. They claim that it takes a few days to get used to, but once you get it, you love it.

The specs aren’t a world of incredible – on the one hand it’s got WiFi, an external screen, bluetooth, 16GB memory card capacity, and the office document compatibility and push email that Blackberry users love so much. But on the other hand, it lacks a few key features that are present on other, comparable, phones. There’s no GPS, the camera is only 2 megapixels and it doesn’t appear to have a 3.5″ headphone jack.

If you want a flip phone and a qwerty keyboard, then this is pretty much your only choice, but if you’re willing for forgo the flip and the small form-factor then other Blackberries offer better features. If you’re willing to miss out on the qwerty keyboard, then I’d take a look elsewhere – perhaps at the N95/N96 range of Nokais, yesterday’s Sony Ericsson G705, or perhaps even an iPhone.

The Pearl 8220 will be out “this fall”, so fairly soon, one would hope. Pricing will be announced by the networks at a later date, but obviously it’ll depend on how much you fancy paying for the contract.