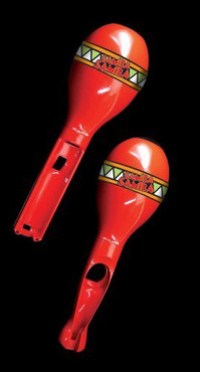 That image RIGHT THERE is proof. All the proof we need. Final, irrefutable proof that Dreamcast was best. It was just released before the world was ready.

SEGA of America has revealed this sexy pair of Wii Maracas to accompany the forthcoming Wii remake of Samba de Amigo, maracas that copy the design and style of the original – and eBay GOLD – motion-sensing maracas set released alongside the Dreamcast game. Back in the year 2000.

You slot your left nunchuk in one, you slot your right wii remote in the other, then you shake it all about. That’s what Samba de Amigo is all about.

The Wii Maracas set is currently only listed on Amazon US – we are aggressively petitioning Nintendo and SEGA to ensure a UK release. Hopefully, it will be like 2000 all over again, when Wii Samba de Amigo launches here on September 19.