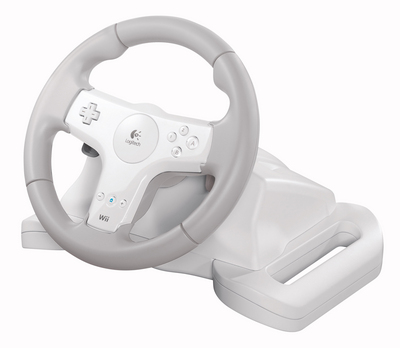 I nearly passed this one over because I was convinced I’d seen it before and as it turns out I nearly have. Logitech has released the Speed Force Wireless Wheel for Nintendo Wii – a racing wheel to you and I – which you’ll be able to get your mitts on come November this year for the reasonable price of £59.99.

I say reasonable as it’s not that cheap as gaming peripherals go but it does have built-in analogue accelerator and brake, 200 degree rotation and, most impressively, it uses a 2.4GHz wireless signal that’ll allow you to game 30ft away from your Wii. So, as long as you’ve got bionic implants or a set of Wii Binoculars, you’ll be fine. (There are no Wii Binoculars.)

The useful part of your hard earned cash goes into the feedback system and the whole device is designed specifically to work with the new Need for Speed Undercover game. Alternatively, you could just buy yourself some insurance, get in your car, experience all the feedback you like, and win a new model when it’s game over.