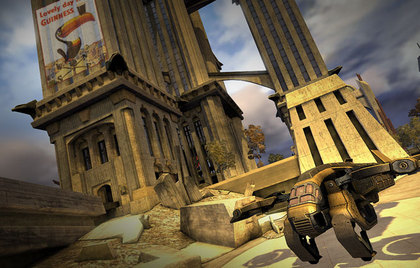 Sony Computer Entertainment America (SCEA) and Sony Computer Entertainment Europe (SCEE) have announced that a new dynamic in-game advertising system is being launched in order to harvest the rapidly growing in-game advertising market. Advertisement distribution company, IGA Worldwide, has been selected as its first partner though more are expected to follow.

“The PS3 platform is primed to leverage the high growth potential of the in-game advertising market,” said Phil Rosenberg, Senior Vice President, SCEA. “Ads that are organic to the environment not only benefit developers and advertisers, but also create a richer experience for gamers.” Yep, nothing like a giant poster displaying bargain buckets of fried chicken to enrich your epic struggle against Mawgromp the Champion of Evil Villainy and His Many Hideous Pixies*.

*Not a real game.

Sony hasn’t made any kind of clarification as to which titles in the PS3 software library are going to enjoy the benefits of in-game advertising. Our PS3 blog, PSPSPS.tv, is putting its money on PlayStation Home – Sony’s hugely-hyped-but-yet-be-opened-to-the-unwashed-public virtual world space – as the first and most likely avenue for advertisement treatment.

Home, however, is completely unproven and there is still a possibility that players might just get bored of it once the novelty has worn off. Advertising within individual games seems like a likely possibility too, so we’ll just have to wait and see whether Sony’s promises of providing ‘a richer experience’ can be upheld. When the push comes to shove and Nike is waving bundles of cash, I suspect on one side of this equation will be feeling the richer experience.

Image for illustrative purposes only. Sony didn’t make it; I did. Using Photoshop. Look closely and you can see I didn’t do a very good job of it.