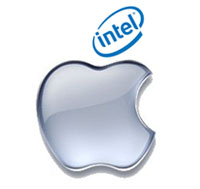 Ok, so yesterday the CEO of Intel Germany, Hannes Schwaderer, was reported in ZDNet suggesting that Apple would be bringing out a new Atom chip-powered tablet device.

Today, under some likely pressure, Intel has released a disclaimer in ZDNet with enough back-peddling to complete the Tour de France several times over. It runs like this:

“Apple iPhone was only called as example of small Internet entrance devices in this connection. Intel knows nothing about future products of other manufacturers and can therefore about it also nothing say.”

Apologies for the clunky Babel Fish translation from the German, courtesy of the Guardian.

It’s not so much the word detail that tells the story here as the fact that me thinks the gentleman doth protest too much. Why would Intel bother denying it so vehemently unless it was true?

Chances are this kind of slip would put Steve Jobs’s nose around 10ft out of joint ahead of his big speech on 9th June and, who knows, the Apple heavies could be round Intel breaking fingers as we speak?

As far as I’m concerned, no-one can keep a secret these days, so why should Apple expect to be able to do the same?