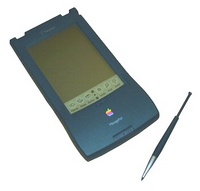 Apple’s Worldwide Developers Conference kicks off this year on June 9, and every Mac fan is already suffering sleepless nights and moist dreams over what gadget Steve Jobs may pull out of his trousers this time.

Today’s rumour is centred around Apple’s showing at WWDC and the current iPhone drought. If the 3G iPhone hits before June as these current shortages suggest, what will Steve flop out at Apple’s premier tech showcase in June?

Apparently, according to MacRumours, it’s going to be a multitouch-powered tablet computer. Apple itself called WWDC a “landmark event” – so Mr Jobs clearly thinks he’ll be packing something BIG to get the livebloggers breaking out the exclamation marks. A 3G iPhone is hardly that big a deal, is it?

Perhaps Apple’s seen the Eee PC success and decided it wants a bit of the cheap ultraportable pie? Or could we see a gaming-centred version of the iPhone, what with the SDK seemingly throwing Apple devices open to the world of casual gaming? We’ll know when Steve reaches inside his trousers this June.