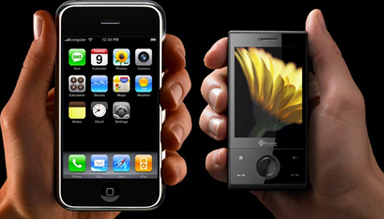 The Touch Diamond handset was announced on Tuesday by HTC, and as expected, every blog and newspaper is calling it the first real ‘iPhone killer’. And here was me thinking we’d expired that term!

Obviously, the Diamond and iPhone have some similarities (even hired similar hand-models!), but the main difference which is dividing everyone’s affections boils down to the original format wars – Mac vs. PC. Want a concise break-down of the pros and cons of each mobile? Whoomp, there it is – below the jump.

Operating System
The former runs on the new Windows Mobile 6.1 Professional, the first HTC phone to do so. However similar it may be to WM 6.0, HTC has actually layered their own software on over the phone, giving it a more user-friendly navigational system, and TouchFLO 3D technology, which we first saw in the Touch last year.

You can draw a huge comparison between the Diamond and iPhone due to the TouchFLO 3D, with users able to browse through photos and songs sliding their finger along the screen, much as you would on the iPhone.

The iPhone runs on OS X, which is Apple’s very own operating system, and as we learned recently with Psystar, very much exclusive to them.

Memory
Buried within the Diamond, HTC has planted 4GB of internal flash storage, plus given the handset 192 MB DDR SDRAM, and a 256 MB ROM. A microSD card slot is supported, for additional storage.

Meanwhile, the iPhone comes in two options, an 8GB or 16GB flash drive, and has 128MB of RAM.

Camera
The camera on the Diamond is quite impressive, with a 3.2-megapixel sensor, and auto focus. The internal accelerometer means the Diamond acts like the iPhone, so photos can be viewed in landscape-stylee and be browsed through with a flick of the finger. The Diamond also has a second camera on the front, a VGA CMOS colour camera, for video-calling.

The camera on the iPhone isn’t quite as impressive, with just a 2.0-megapixel sensor, and no auto focus, flash or any editing software. 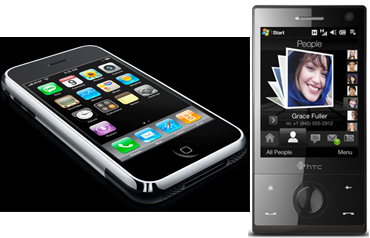 Media Player
An integrated speaker and FM radio feature in the Diamond, with the iPhone lacking both – well, you can play tunes through the tiny inbuilt one, but we wouldn’t suggest it. However, the iPhone’s main thrill is indeed the iPod functionality, and with 8GB or 16GB options, that’s a lot of AAC, Protected AAC, MP3, MP3 VBR, Audible (formats 1, 2, and 3), Apple Lossless, AIFF, and WAV. Meanwhile, the Diamond supports MP3, AAC, AAC+, WMA, WAV and AMR-NB.

Connectivity
Rumours have abounded since the first generation of iPhones came out, that the next model would have 3G connectivity. We’re now hoping for a June announcement and release date, but nothing has been confirmed as yet. The Diamond has managed to pip it to the post, with HSDPA connectivity, and 384 kbps up-link and 7.2 Mbps down-link speeds.

The iPhone, meanwhile, has, err, Wi-Fi, and, uh…Bluetooth…

GPS
The Diamond has GPS and A-GPS, however not much else is known about it than that. The iPhone, on the other hand, has Google Maps, which is a pleasure to use, particularly in conjunction with the multi-touchscreen. 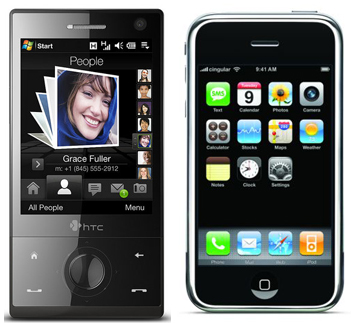 Battery Life
You’ll get a fair bit out of the Diamond, with 270 minutes’ talktime for WCDMA and up to 330 minutes on GSM networks, whereas standby is 396 hours and 285 hours respectively. When video-calling, users will get up to 145 minutes on WCDMA.

The iPhone is advertised as having up to eight hours of talk time, up to 250 hours of standby, 6 hours of internet use, 7 hours of video playback, and up to 24 hours of audio playback.

Availability and Pricing
The HTC Diamond will be out in June, with pricing not yet confirmed. The iPhone is already out, and available on 18 month contracts for either £35, £45 or £55 a month, plus of course the upfront fee. Apple’s third party retailers (O2, Carphone Warehouse) recently cut the price of the 8GB model, to £169, however they appear to not be selling them anymore. The 16GB model is £329 upfront.