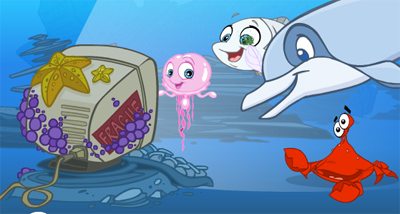 School children all over the UK will be warned about the dangers of the world wide web by a dolphin and his aquatic pals in a new cartoon from New Zealand called “Hector’s World”.

The Little Mermaid-like show is part of the ThinkuKnow campaign that aims to educate children between 5 and 7 – 21% of whom are thought to use the internet unsupervised – with episodes entitled “The Info Gang” and “It’s a serious game”.

Little Hector – who between you an me is a bit of a goody-two-shoes – and his mates coast the fringes of internet dangers before they collectively think better of it and avert disaster. PC Jim the seahorse then turns up to reinforce the message and congratulate the children.

I’ve watched the first episode “Details Details” and it’s not too bad, you know. Without spoiling it, Ranjeet the crab – the best character by far – invites Hector and the others round to look at his new computer.

He’s about give his real name out on instant messenger when Hector gets advice from a passing whale that it’s not a good idea as there may be all sorts of paedophilic sharks and angler fish out in the deep on their desktops just waiting to prey on a little crab like Ranjeet.

I’m not going to tell you how it ends but I don’t think I’d take it as well as Ranjeet if Tama the jellyfish short-circuited my computer. Come to think of it, how did she manage that? Jellyfish don’t give electric stings. It’s chemical. Hector would have needed Eric the Electric Eel for that job. Right that’s it. I’m not letting my children watch this inaccurate rubbish!