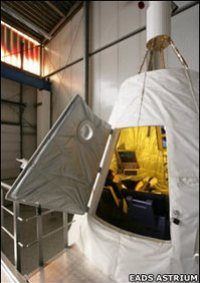 It’s only a prototype, but the new EADS Astrium design here is based on the existing unmanned Jules Verne pod already flying about up there, so it could easily take scientists and the odd paying billionaire up into the ionosphere with a bit of tweaking.

Very handy if you’ve recently applied to be an astronaut or are just generally excited about space things because you haven’t had your enthusiasm crushed out of you yet.

Within 10 years, according to EADS, there could be a manned European space programme should the various countries involved not mind coughing up the enormous amount of money – about one billion euros – required.

With the ancient American space shuttles due to be taken out of service in 2010, Europe could well find itself at the forefront of manned space travel. And they’re going to need someone to “live blog” from the launches! (Me).