With the HD DVD Promotional Group dissolving, Toshiba abandoning ship, and precious few studios releasing anything on the format any more, you’d have to be totally uninformed and just a little bit stupid to buy an HD DVD player thinking that it was the future.

Enter two fairly benign entities — online retailers and the Great British consumer — which when mixed can be deadly (or at least, good for making expensive mistakes)

Still, surely we can rely on our helpful, informative, reliable, up-to-date online retailers to ensure that visitors to their web site don’t make a stupid purchase they’ll regret as soon as it leaves its cardboard and polystyrene womb?

Here’s a roundup of some key (and not so key) Internet stores, and their current attitude towards HD DVD. 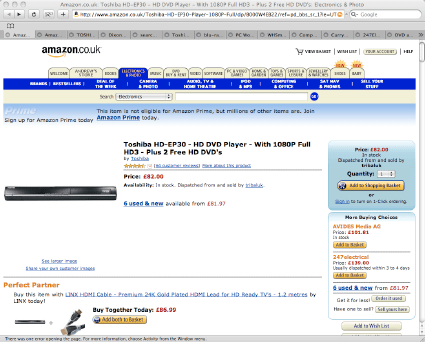 Ahh, good old Amazon. You’d think that, with Amazon US having made things pretty clear, our equivalent would have done the same.

You have to search around a fair bit to discover that the HD DVD camp isn’t as strong as it used to be. Fortunately, if you can bear to read the customer reviews, you’ll generally find out that way. 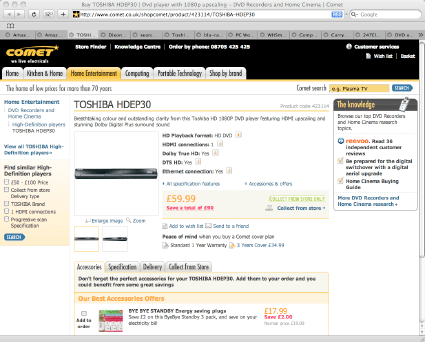 Absolutely no mention of HD DVD’s fateful demise. No, you can happily buy a Toshiba HD-EP30 for sixty quid and be none the wiser (other than the fact it’s been discounted by ninety quid, perhaps) 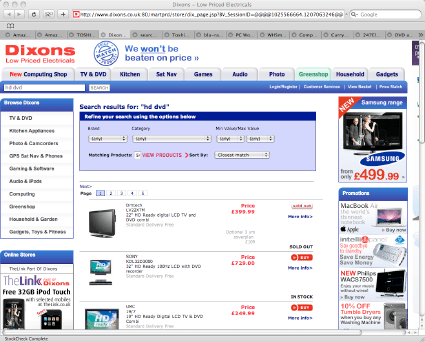 Well, good old Dixons. It looks as if it’s impossible to buy an HD DVD player now. Then again, you can’t buy a tape recorder or a VHS video either. Dixons really are “the future for less” after all. 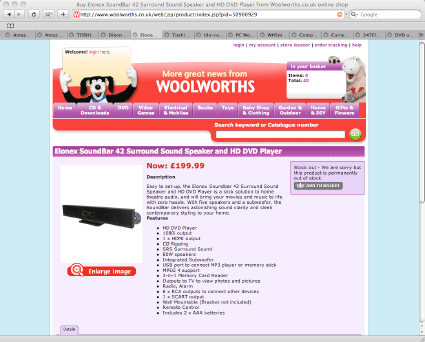 If you were contemplating buying a high definition player with your Pick and Mix and a JML Slice and Dice (yes, I do crack that joke every time I talk about Woolworths) then you’d be out of luck.

The only listed item, the Elonex SoundBar 42 Surround Sound Speaker and HD DVD Player, is permanently out of stock. And a good thing too. 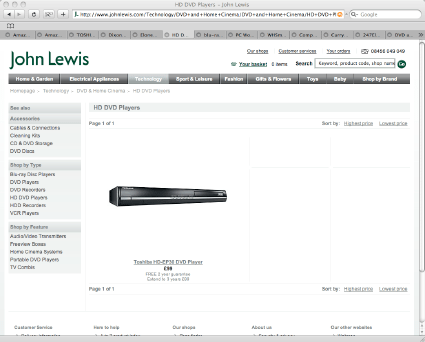 Never knowingly undersold, but possibly unknowingly had the wool pulled over its eyes. The Toshiba HD-EP30 is still on sale for £99, with no notice about the death of HD DVD. 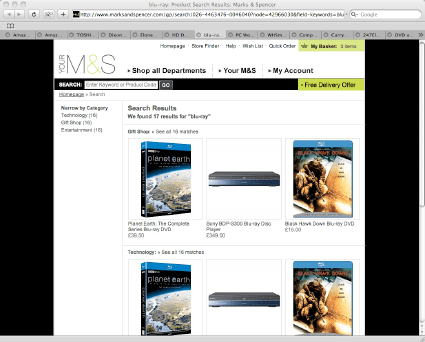 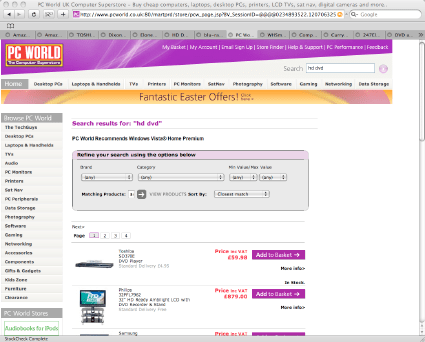 No HD DVD players in sight. 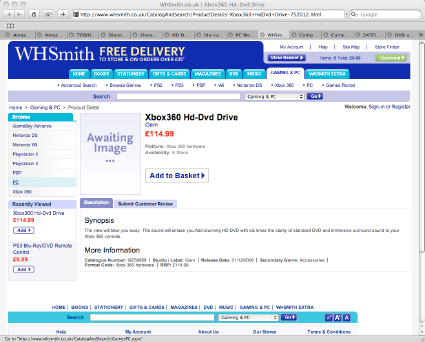 They sell the Xbox 360 HD DVD (for which they haven’t sourced a product image yet). Neither do they say that the drive is near extinction. 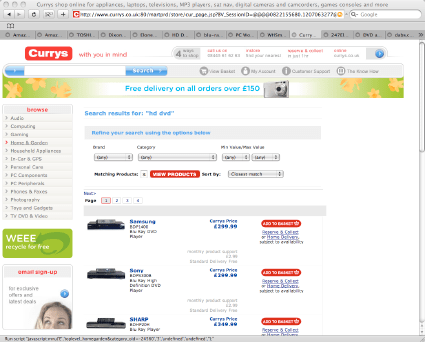 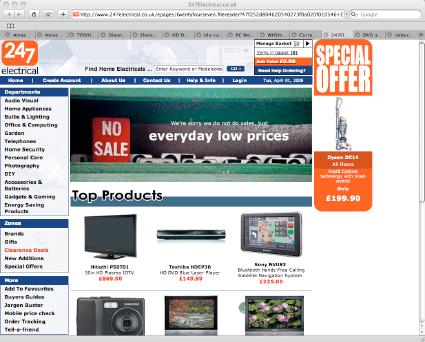 Shame on you 24-7 Electrical! You’ve got the ED-EP30 for £149.89 and it’s one of your “Top Products”. This is unreal. No mention anywhere on the product page that the format has died. 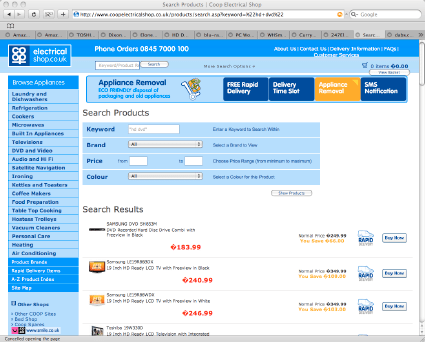 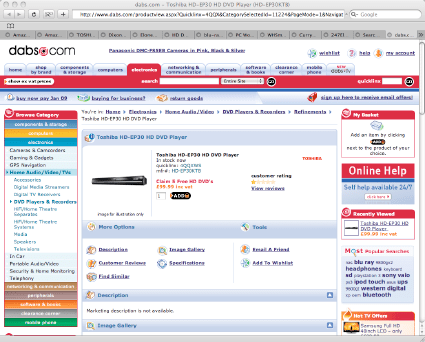 No mention that the hundred quid Toshiba HD-EP30 is now dying, though an anonymous reviewer does spill the beans. 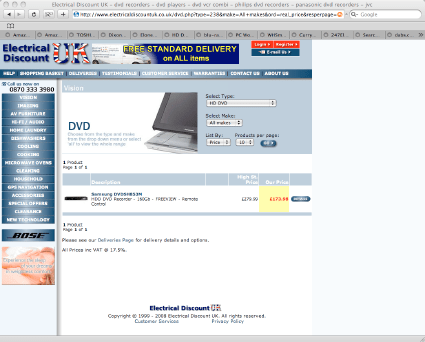 This online store doesn’t even seem to understand what an HD DVD player is. Selecting HD DVD from the drop down menu brings up a Samsung HDD DVD Recorder, but no HD DVD players. Less than helpful. 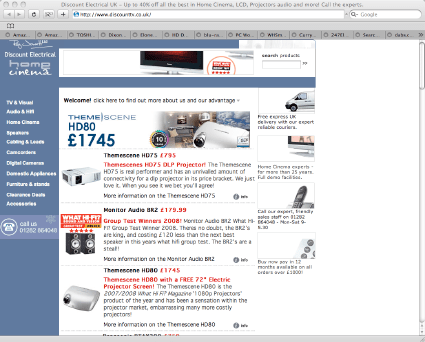 Appear to sell a couple of Blu-ray players, if you dig around for them, but no HD DVDs. Good show. 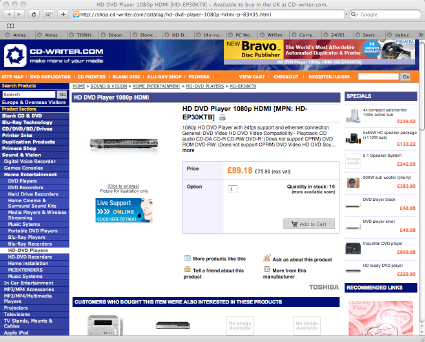 Better hurry, CD Writer has just ten of the HP30 babies left in stock. No mention that they’re old technology. 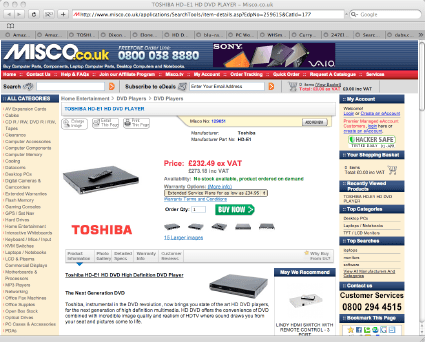 According to Misco, HD DVD is “the next generation DVD”, though they don’t have any stock in, and will order the product on demand. Good luck with that. 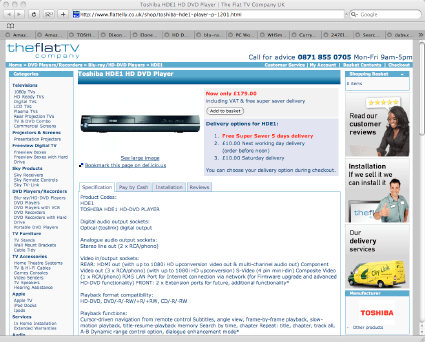 Selling the Toshiba HD-E1 for £179 and not a peep about how useful a player with no discs could be to you. 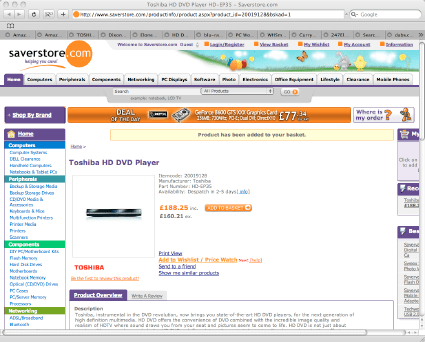 So keen was SaverStore to sell me an HD DVD player it automatically added the HD-EP35 to my basket without me having to ask. Still no mention of its demise, though. 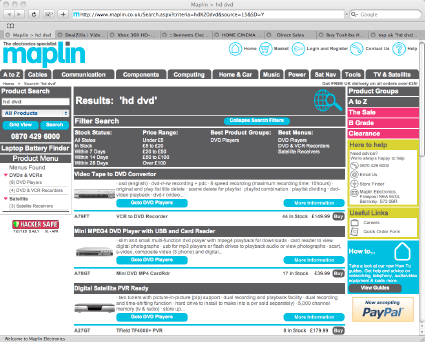 Sells Blu-ray media, but no HD players of either persuasion. 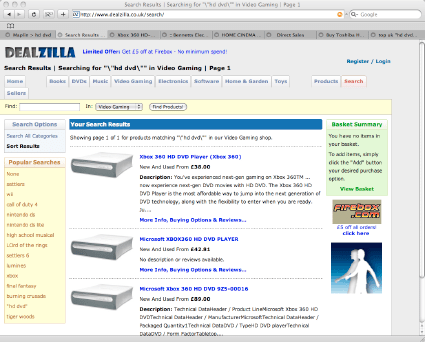 OK, what the hell is going on with this web site? Any request for an HD DVD player brings up “The Spontaneous Mind”. I was even able to add this book to my basket for the princely sum of £214.05. I think it’s safe to say that no-one will be buying a defunct player from their suppliers, but they may be grossly overcharged for a book.

Update: Two days on, as screenshot proves, the “problem” has been fixed — or rather, replaced with the Xbox 360 HD DVD add-on drive. 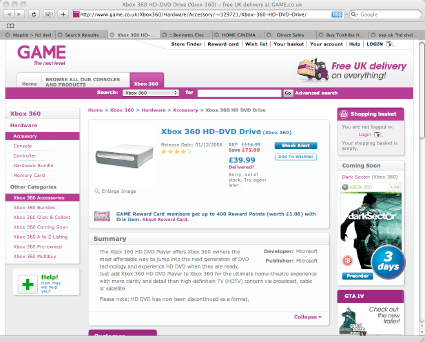 Tantalises the casual surfer with a £70 discount on the Xbox 360 HD DVD add-on, though it’s out of stock. The site helpfully states “Please note: HD DVD has now been discontinued as a format”. 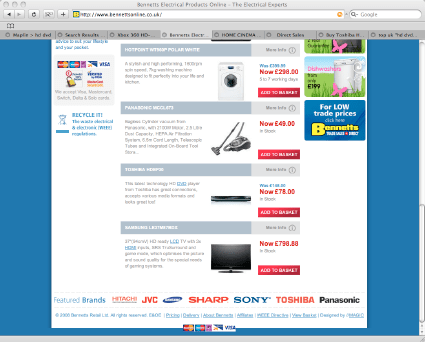 The Toshiba HDEP30 is on their front page, presumably as a recommended item, and there’s no mention of the format’s state on the product page. Apparently, “This latest technology HD DVD player from Toshiba has great connections, accepts various media formats and looks great too!” Mmmm. 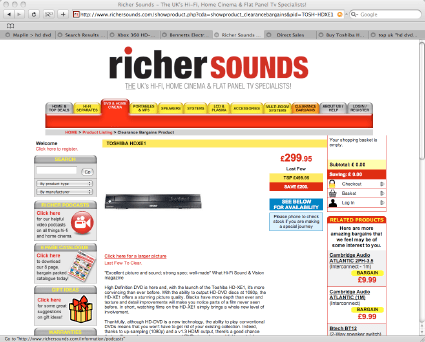 Richer Sounds have a few Toshiba HD-XE1s remaining to clear, with just five left. Pop over to Bournemouth, Cambridge, Ealing, Glasgow, or Southampton if you really want one — for £299.95. 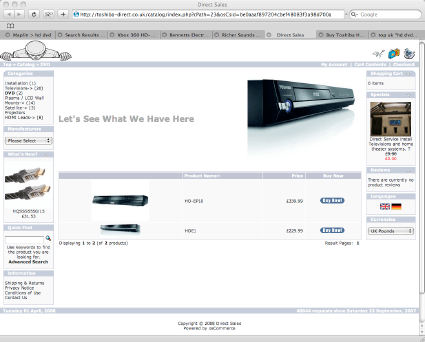 “Let’s see what we have here”. Indeed, that’s what I’m doing.

Fortunately, this isn’t an official Toshiba site, which is just as well as they’re still selling the HD-EP10 and HD-E1 with no mention of their defunctness. 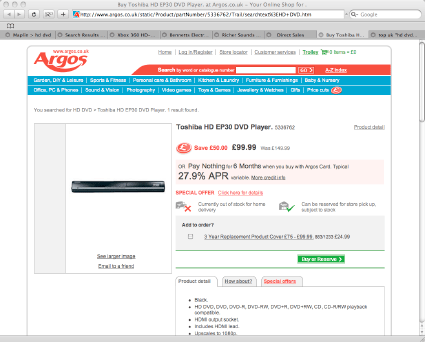 Still selling the HD-EP30 with no mention of the cull. 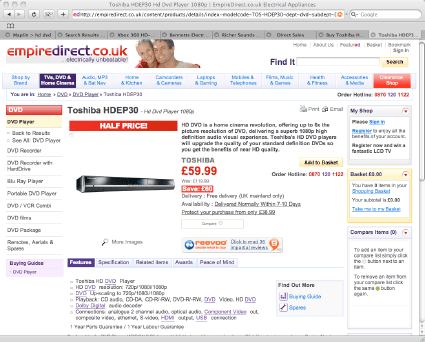 Empire Direct are selling the HDEP30 for half price, despite HD DVD being “a home cinema revolution”. Are we surprised that there’s no mention of HD DVD’s deadness?

Looks like you still need to be fairly careful out there. Even if, for some bizarre reason, you still want an HD DVD player, you could still get stung by some pretty steep prices.

Be careful out there.