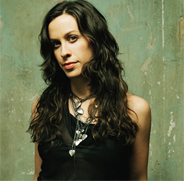 Alanis Morissette must’ve turned green with envy when Ricky Martin collaborated with Kingston to release some new tracks on a USB stick, as it’s just been announced she’s teamed up with Motorola to offer the song ‘Underneath’ on the W270 phone.

It’ll be in the form of a preloaded track on the W270, and will be a sneak peek at the angsty songstress’s album being released in June. Sadly (for the diehard Alanis fans) it’ll only be available in Brazil, where it will retail for around $100.

I’m surprised Motorola didn’t make her re-record ‘One Hand In My Pocket’ as ‘Got The W270 Phone In My Pocket’.

(via Billboard, for more music-related news, check out our Shiny blog My Chemical Toilet here)