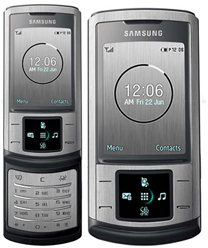 We may’ve first heard about this phone in early February, however it’s taken Samsung until today to officially announce it for their European market.

Hopefully you can remember the specs, but admittedly there has been an awful lot of releases since then, so here’s a quick round-down. The HSDPA GPRS/EDGE Tri-Band handset features a 5.0-megapixel camera with LED flash, auto focus, Wide Dynamic Range, Face detection, image stabiliser and also an image editor.

Those photos should look extra-good on the 2.2″ GVGA TFT LCD screen, which adopts that nice ‘magical touch’ technology that changes the keypad and menus according to the user’s habits, and it also has a microSD slot for loading MP3s and other media onto, which will certainly be playable with an internal amplifier powered by Bang & Olufsen Icepower technology, and a normal 3.5mm headphone jack.

Samsung still hasn’t confirmed the pricing or exact date of arrival, but as soon as we hear it, you’ll hear it – promise.