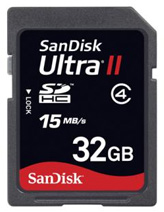 It’s fairly dry to start off with a story about an SDHC memory card, but when you hear the news below, you might just self combust with happiness. I know I already have – I’m writing this from my grave.

32GB! 32GB of storage on an SDHC card! SanDisk today announced the full details of their new addition to the reputable Ultra II range of memory cards, first mentioned at the end of last year. With a read/write rate of up to 15MB per second, the 32GB card will be a – brace yourself – massive $350. Yes, that’s about half the price of your Canon EOS 400D.

Considering that’s out of most people’s budgets, they’ve also given us details of an 8GB card for $100 and a 16GB card for $180. Expect to see professional pappers using the 32-gigger come April, and the smaller sizes in March.