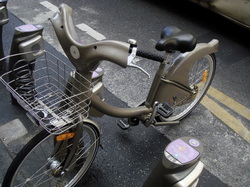 Late last year, I visited Paris and was introduced for the first time to the Velib system of bicycle hire, with Parisians able to pick up a bike, ride across the city, and deposit it at any of the docking stations spread around the city. Now London is copying the idea.

We’re not getting them until the summer of 2010, mind. But there’ll be 6,000 initially available, and they’ll be free to ride for the first 30 minutes, and then will cost around a quid an hour after that. London taxpayers will be footing the £75 million bill to set it all up – in contrast to Paris, where advertisers funded it.

Docking stations will be found every 300 metres in the West End and City districts of London, while the bikes have been made deliberately “grannyish” to deter thieves. Is there a tech angle to this story? Er… maybe they’ll put lasers on the bikes. Well, it could happen…

Related posts
Live in a high-crime area? You need the Biomega Boston theft-proof bike
trioBike – the eco-friendly way to get your family around
Virgin Media introduces ‘greener’ bike-based engineers

One thought on “London to get free hire-bikes, just like Paris”