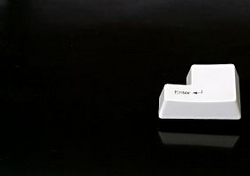 Researchers at Carnegie Mellon University in the US have developed something called the Relative Keyboard, which is (kinda) an invisible keyboard. At least, you type on a blank touchscreen, and the software figures out what you meant to type by measuring the relative distance between your keystrokes.

Dictionary-based filtering works out what you meant to say, although experiments have shown the technology is apparently variable – some people type nearly as fast as on a proper keyboard, while others can’t get their heads round hammering out words on imaginary keys at all.

Anyway, the researchers are presenting a paper on the relative keyboard at a conference this month. I can’t help thinking that if you’re going to be tapping away on a touchscreen, you might as well have virtual keys displayed on it. But perhaps I’ve missed the point.