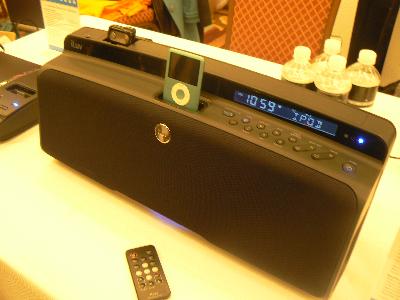 iLuv was in the house at tonight’s pre-CES Digital Experience event, and had a couple of new products on show. The i399 (pictured) is the company’s new iPod speaker dock, with a fat sound and a built-in woofer, and also iLuv’s patented Blue Pin technology.

What’s that? A Bluetooth receiver and transmitter, of course. So you can stream music from a music device or mobile phone to the i399, or stream music from it to a pair of wireless headphones. And it can even work as a big Bluetooth headset, quieting the music when a call comes in and letting you talk into its built-in microphone.

The i399 out in February, and will cost around $229 in the US. Meanwhile, iLuv also showed the i1255, which is out in March for around $149. It’s a DVD and iPod video that hooks up to your TV. It doesn’t have an HDMI output, but this will apparently feature in a future version of the product.