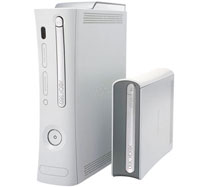 Uh-oh! Time for another update on the relative successes and/or failures of the new HD movie formats – this time as seen through the eyes of impartial American stat-compiler NPD.

According to the HD DVD consortium, 750,000 HD DVD players have been sold in America – and the cheap old Xbox 360 HD DVD add-on has been responsible for 269,000 of those sales says NPD.

Microsoft and the rest of the HD DVD consortium will be pleased to hear that this isn’t just a third – it’s JUST OVER A THIRD! Expect that phrase to to be appearing in an HD DVD press release in the next few days, as the ever more desperate HD camps try to convince punters that there is a reason to bother upgrading our trusty old DVD players.

For more news about who’s winning the HD format war today, then the subsequent press release from the losing side the next day about how they’re actually in the lead now, check out Shiny Media’s HDTV blog at HDTVUK.tv.