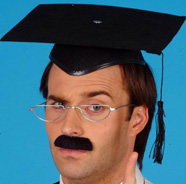 Yesterday the whole world laughed at the absurdity that a high-school student in the US got detention for using Firefox in class, but now it’s time for those chuckles to die down, as the principal himself has rubbished the story on the Big Spring High School website.

Principal John C. Scudder claims on the site it was “an altered version”, and that “the reports, blogs and other sources on the Internet indicating that a Big Spring student was assigned detention for using the Firefox internet browser instead of Internet Explorer are untrue and were based on the fake letter”.

Related posts
Boy given detention for using Firefox in class
Mozilla launches Operation Firefox ‘astro-turfing’ project, asks fanboys to vandalise for them
Don’t wet yourself, but Mozilla is launching a Firefox browser for mobile phones in 2008